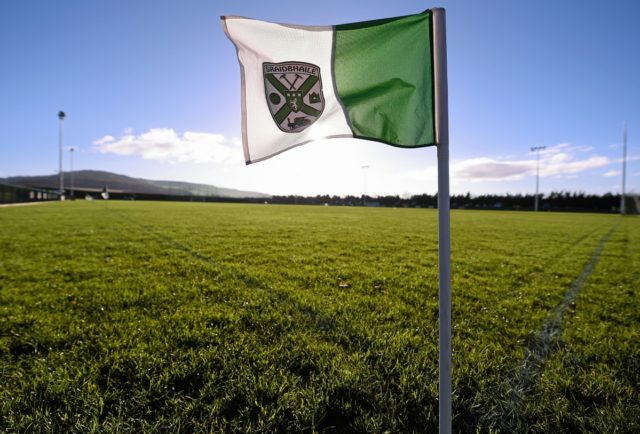 Stradbally recovered from their ten goal humiliation against Portlaoise last time by defeating Ballylinan this season.

Barney Maher’s charges were in control of this one from around the tenth minute with veteran forward Colm Kelly and midfielder Jack Deegan doing most of the damage as they kicked seven points between them.

Ballylinan played against the stiff breeze in the first half but early points from John Kealy and Andy McEvoy actually had them ahead after six minutes.

Jack Deegan opened Stradbally’s account before they took a lead they wouldn’t relinquish when Justin Lalor and Eoin Buggie combined with Colm Kelly’s who’s lovely handpass released Conor Delaney and he fired the ball to the net.

Kelly added and free with Jack Deegan firing over a second before Stradbally were awarded what seemed a rather soft penalty at the midpoint of the half when full back Dermot Leonard was adjudged to have been holding Kelly as a high ball was sent in from Conor Delaney.

The full forward stepped up to take the spot kick but keeper Darren Burke guessed right to keep the shot out.

Stradbally ended the half with two more points from Colm Kelly and Podge Fitzpatrick to take a 1-5 to 0-2 lead into the dressing rooms.

Colm Kelly and Robbie Donoher traded points on the resumption of play but Ballylinan’s shooting let them down then as they fired a number of wides from distance.

Colm Kelly and Jamie Kavanagh extended Stradbally’s lead but Padraig McEvoy and Jamie Farrell hit back to leave it 1-8 to 0-5 as we entered the final quarter.

Jack Deegan and Jamie Devoy moved Stradbally on again and while Jamie Farrell responded, further Stradbally scores from Podge Fitzpatrick and Justin Lalor left them nine clear with a couple of minutes to go.

Ballylinan kept going and managed a late goal from Brian McEvoy but they couldn’t get any closer than that as they remain rooted to the foot of the table with one point from six games.