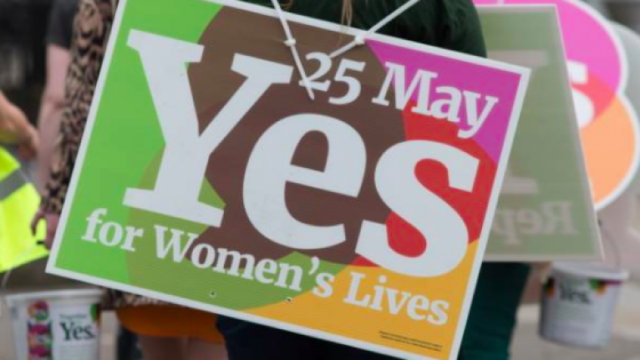 The referendum in Laois turned many political assumptions on their head.

How people in certain areas voted, what issues they were concerned about and how they came to the decision of how to vote were a long way from established political beliefs.

In Laois a small number of volunteers headed up by Elaine O’Neill and Gearóidín McEvoy campaigned on behalf of Together for Yes. They ran a grassroots campaign and faced fierce opposition on the No side throughout the campaign.

At the end there was not only a resounding Yes vote in Laois but more Laois people voted in this referendum than in the last General Election.

People that voted reflected deeply and decided how to vote based on the issue involved in this campaign alone.

In Knockmay our analysis showed the opposite trend with 69% voting for marriage equality in 2015 and 52% voting for Repeal. People decide how to vote in referendums and in local/general elections based on the issues present in those elections alone.

This is something we in the Labour Party are acutely aware of. Despite the online commentary I would expect that this referendum result will have little, if any, impact on the next General Election in Laois/Offaly.

Prior to the referendum there was a narrative that there would be a significant Urban/Rural divide. The Divorce referendum in 1995 was regularly cited, in that referendum Dublin voted for the proposal while the rest of Ireland voted against it.

An analysis from our tallies showed that in Laois at least, the urban/rural divide was a myth. In Wolfhill we tallied a box that showed a 70% yes vote, in Ballyinan the yes vote was running at 58% and in Ballybrittas 73% of people voted yes.

The narrative about the supposed Urban/Rural divide didn’t take into account the changes that have occurred in rural Ireland. Huge numbers of Laois people travel out of the county every day for work, with many people spending much of their working day in cities and towns.

Much of the discussion about the Urban/Rural divide comes from commentary based on the American electoral system, A country that has vast and underpopulated rural states and densely populated cities. The reality is of course very different in Ireland.

During the campaign there were posters covering almost every lamppost in the county. Ask any parent of young children and they will tell you of the difficult conversations they experienced while trying to answer their child’s questions about the images and messages they were seeing.

But what impact did the posters have on the result? This is difficult to answer definitively but we can look at some examples around the county. In Portarlington, a local ban on posters was in place. In the town the turnout and voting pattern was similar to other areas of the county.

Outside of Portlaoise most rural towns and villages had a far higher proportion of no posters in comparison to those on the yes side. It’s clear that this did not translate into votes. The village of Ballyfin provides us with an interesting example. The highest yes vote that we tallied anywhere in Laois was from Ballyfin.

We counted one box from there that had an 80% yes vote. What makes Balluyfin different is that the no side had an absolute monopoly on posters in the local area. While a small sample it does suggest that the messages on some of the no posters may have been counter productive.

Regardless of the outcome it is clear from this election that further limitations need to be placed on political posters. Many of which make their way into landfill. This level of waste can no longer be tolerated. Personally, I would like to see the establishment of community postering boards like in France where percentage allocations are granted for images in a referendum or election in an effort to reduce postering around the county.

Both the 1983 and 2018 referendums on the 8th amendment were difficult for people to endure. They challenged people to make a decision on a private and sensitive subject. This referendum sparked debate and arguments amongst friends and families and a seemingly endless commentary on social media platforms.

In the final analysis the referendum showed that people voted based on their own deeply held personal beliefs and values. Simple assumptions about how people would vote based on where they lived, their religious beliefs, their age or their gender did not account for the complexity of the issue.

Those assumptions did not do justice to the voters and the thought and consideration they gave to the decision, regardless of how they voted.

SEE ALSO – Isabel Dwyer: The people of this town, this county and this country showed the compassion they really have