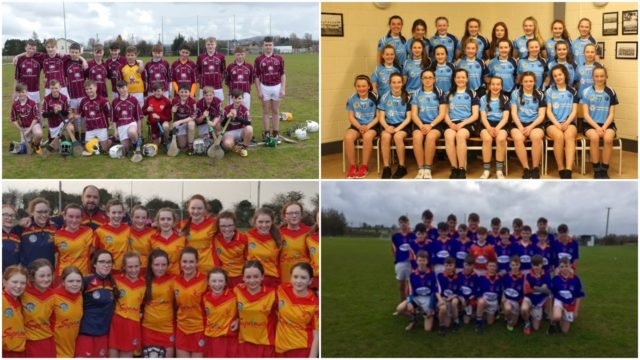 This year five Laois teams – three in hurling and two in camogie – will be heading to Connacht for this year’s Feile na nGael.

Castletown-Slieve Bloom, Ballinakill and Na Fianna hurlers, The Harps camogie and O’Moores camogie are all representing Laois in their respective codes and divisions.

Quarter-finals in both the Shield and Cup take place on Saturday afternoon with Connacht GAA Centre hosting the semi-final and finals on Sunday.

Castletown-Slieve Bloom are representing Laois in Division 2 of the Feile after defeating neighbours Camross in the Laois ‘A’ Feile final in April.

The last time Castletown-Slieve Bloom represented Laois in the Feile na nGael was in Dunloy in 2014, and Tom Phelan’s side are raring to go as they head to Ballinasloe this weekend.

They then take on Clare side Eire Og from Ennis in their final group match on Saturday morning.

Ballinakill are taking on the forces of Galway and Armagh as they compete in the Division 4 Feile over the weekend.

The men in maroon travel to Clonfert on Friday to play Mountbellew Moylough at 5pm and the winners of the Armagh Feile after that.

On Saturday they face a second Galway side, Meelick Eyecourt, in Clonfert at 10.45am.

From there, they will either play in the quarter-finals in Cup competition or Shield competition in New Inn, Woodmount or Cappataggle.

Na Fianna are an amalgamation of Mountmellick and Ballyfin at juvenile level and they are off to the Feile despite not winning either Laois edition.

They have been invited to go and will compete in Division 7.

They will face Galway sides Tuam and Padraig Pearses on Friday before playing a team from Antrim on Saturday.

We will bring you their panel once we get it.

The Harps broke a 16 year spell as they were crowned Laois ‘A’ winners of the Feile for the first time since 2002. The girls will be in division three of the competiton and are being hosted by Ahascragh Caltra of Galway.

They begin their campaign against Killimor of Galway on Friday before taking on the winner’s of the Tipperary ‘B’ competition later that evening.

On Saturday they go to Fohenagh to play Ahascragh/Caltra from Galway. From there, they will go into either the Shield or Cup quarter-finals to be played on Saturday afternoon.

The Shield and Cup semi-finals are played on Sunday morning, with the winners of these progressing to the final in Connacht GAA Centre on Sunday afternoon.

The O’Moores girls are venturing to Portumna for their Division 4 competition.

Crusheen from Clare will be the first team O’Moores will face, followed by St Rynagh’s from neigbouring Offaly. Portumna are then awaiting O’Moores in their home pitch on Saturday at 10am.

Whichever teams qualify for the Shield quarter-finals will head to Mullagh, Galway while the Cup qualifiers will make their way to Kiltomer or Clontuskert on Saturday.

Sunday will see the Shield semi-finals played in Kiltimagh, Mayo, with the Cup semi-finals gonig to the Connacht GAA Centre. All finals will be played here.