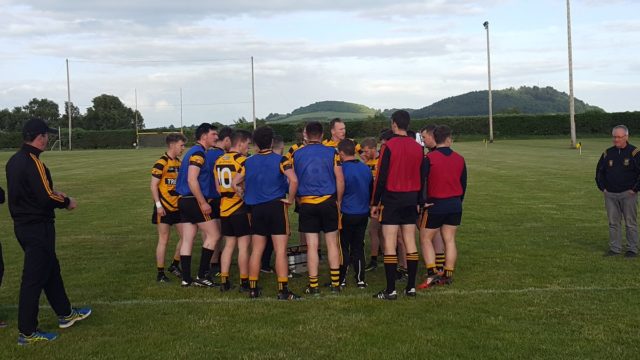 There were wins for O’Dempsey’s, St Joseph’s and The Heath in tonight’s Division 1A action.

With three rounds to play, Ballylinan have now been relegated after they lost heavily to The Heath who remain second alongside O’Dempsey’s.

While St Joseph’s remain top of the table.

Here is a run down of how the games went.

O’Dempsey’s inflicted a fourth straight defeat upon Stradbally in Bill Delaney Park to remain in second place in the table.

Stradbally actually made a blistering start and were five points up in as many minutes.

Jody Dillon kicked two points and then combined wonderfully with Greg Ramsbottom to set up Justin Lalor for his first goal.

But back came O’Dempsey’s and they were ahead by the eleventh minute. Full forward Dan McCormack could have had a hat trick in that period as he hit the bar and blazed another effort over before eventually rippling the net at the third time of asking.

He and Matthew Finlay then hit further points to move the Killenard men ahead for the first time.

Jody Dillon and Conor Meredith swapped points before Stradbally took the advantage  again through a point from Greg Ramsbottom and a second goal from wing forward Lalor.

But O’Dempsey’s finished the half like a train to take a four point lead by the break.

A brace from Eugene Nolan, along with efforts from David Howlin and Conor Meredith set them on their way before Nolan palmed home a goal to leave it 2-8 to 2-4.

Conor Meredith and Jody Dillon traded points on the resumption before O’Dempsey’s had their third goal after a high ball from David Howlin was fisted into the net by McCormack.

Jody Dillon pointed before three in a row from midfielder Liam Knowles cut the gap to four with ten minutes to play.

But that was as close as Stradbally would come. Peter O’Leary settled O’Dempsey’s with a point before Matthew Finlay landed a late brace to seal a six point win.

The Heath ran out extraordinary 25 point winners over Ballylinan tonight.

It is a result which keeps them in the hunt for a league final place and also relegates Ballylinan in the process.

It has been a very tough campaign for last year’s defeated county finalists who have only managed to pick up one point from the ten games they have played.

Evin Keane was The Heath’s tormentor in chief as he scored 2-12 over the course of the hour on just his third game back from a long term injury.

Ballylinan didn’t score in the first half as Robbie Dowling, Colin Nestor, Robbie Ging and Brian Ging all scored points to leave it 1-13 to no score at the break.

The Heath were 19 points up before Ballylinan got their first two points but that was merely a brief respite.

The home team ended the game with goals from Evin Keane and Robbie Dowling, who finished up with 1-3, to claim a deserved win.

St Joseph’s made it eight wins from ten games as they edged out Graiguecullen in a low scoring affair tonight.

It was a defeat which leaves the Barrowsiders just a point above the dropzone with four games still to play.

Meanwhile, for St Joseph’s, it means that two more wins from their last four games will guarantee them a final place for the second consecutive year.

The visitors struck for two first half goals to go in 2-0 to 0-3 in front at the break.

Brian Byrne and Luke Aylesbury raised green flags and the former then added two more points in the second half.

The stage was set for someone to win the game and Brian Daly was the match winner with a minute to play when he swung over the winning free.