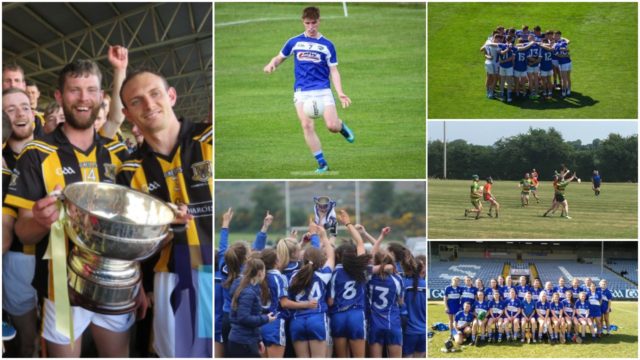 We here are LaoisToday are going to be up to our eyes over the next five days as the GAA season in Laois goes mad with 13 significant games taking place.

The action all gets underway tonight with two big games down for decision.

Here is a run down of all the games:

The Laois Ladies won the Leinster championship six weeks ago following a thrilling victory over Meath.

They take on a Limerick team who enjoyed a 5-5 to 1-6 victory over Clare in the Munster decider.

A place in an All-Ireland final against either Armagh and Clare is up for grabs but Laois will be without two key players tonight – Sarah Larkin and Ciara Byrne.

The showpiece event of the domestic hurling league calendar takes place in Mountrath this evening.

Rathdowney-Errill will take on reigning champions Camross in a game which promises to be very close.

The aforementioned duo finished level on 11 points with Clough-Ballacolla in the league but a draw sent Rathdowney to the final and pitted Ballacolla against Camross.

The champions came through that game well and will be hoping to do the same tonight.

The Division 1A final takes place in the LOETB Centre of Excellence with the matter of promotion already decided.

Rosenallis will replace Portlaoise in Division 1 next year as Rathdowney-Errill already have a team in the top tier and cannot have two.

Rathdowney finished the season top of the table while Rosenallis got here after coming through a semi final against Ballinakill last week.

At the same time in Colt, another hurling final takes place where promotion and silverware are on the line.

Slieve Bloom got the better of Borris-Kilcotton in their semi final to reach this stage.

In the first year of their new amalgamation, Park-Ratheniska-Timahoe have qualified for an adult league final.

They are up against Camross’ second team who finished top of the table.

The Laois Camogie team will be hoping to bounce back to form when they host Carlow on Sunday.

Laois were well beaten by Cork in their first game and face a Carlow side who have already lost twice.

With both teams needing the win, this local derby may well come down to the wire.

Without kicking a ball last night, the Laois minor footballers qualified for the Leinster semi finals.

They won their opening two group games against Longford and Wexford before drawing with Carlow and then losing to Kildare.

What that all meant was that they needed Kildare to defeat Longford last night to get second place in the group – which is what happened.

Despite Meath topping the other group, they travel down to O’Moore Park on Saturday due to a home and away agreement between the two counties.

Portarlington are in Saturday’s final and who they are playing has now been determined.

The Rock faced The Heath in the semi final, which The Heath qualified for by edging out Stradbally last weekend. And The Heath ran out convincing winners here.

St Joseph’s are enjoying an incredible year so far as all three of their adult teams have qualified for league finals.

Graiguecullen are St Joseph’s opponents with the Barrowsiders edging out the Kellyville men by 0-14 to 0-13 when they clashed in the league itself.

Like St Joseph’s above them, Rathdowney-Errill have also qualified for three adult finals and the third of them takes place on Saturday.

They face Abbeyleix in the Division 4 decider and they will hope to already have two pieces of silverware in the bag by the time they throw in the ball here.

Portlaoise’s first team may have been relegated from Division 1, but their third team are going great guns in Division 5.

They, and The Harps, have beaten everything before them leading up to this final and this should be a bumper affair.

The big one. John Sugrue’s Laois senior footballers have one more chance to reach the Super 8s when they face Monaghan in Navan.

Laois were last seen in Leinster final defeat to Dublin but the winners of this game can enter the next phase of the competition.

The victors will be in a group with Kerry, Galway and the winners of Fermanagh and Kildare.

And the crazy weekend of football and hurling finals will come to an end on Sunday evening in Mountmellick.

And for the second year running, the footballers from Camross and Rosenallis will contest league honours.