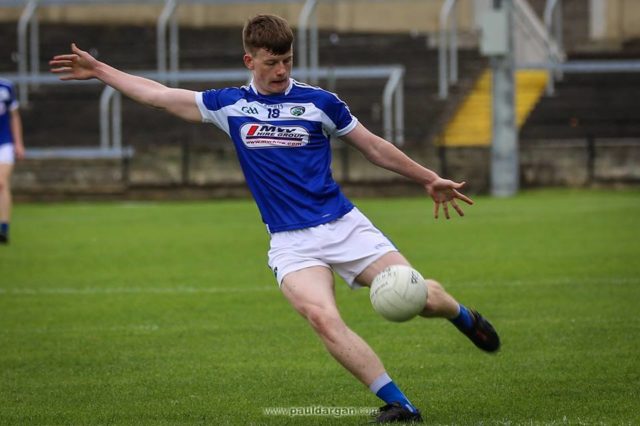 The Laois minor footballers will be looking to reach the Leinster final for the second time in the last three years when they face Meath this afternoon.

At 12pm today, they will go head to head against their opponents in O’Moore Park in the semi finals of the Leinster championship.

Donncha Phelan’s side were in a group with Kildare, Wexford, Carlow and Longford.

This was Group 1 of the newly revamped Leinster minor championship and Laois had to finish in the top two spots to make the semi final.

Wins over Longford and Wexford, along with a draw against Carlow, had them in a good place but a crushing defeat to Kildare left them in limbo.

They sat second in the group but had played all of their games while Longford, who were back in third and could still catch Laois, needed to defeat Kildare in their final game.

That took place on Tuesday and although the sides were level as we entered the final quarter, Kildare pulled away to win and this meant Laois finished second.

Anyway, we will now take a look at the match ahead:

The Laois team named ahead of today’s game is:

What Meath players should we watch out for?

Meath were in the six team group and won their first four games against Offaly, Louth, Dublin and Westmeath to qualify with one game to spare.

They lost to Wicklow in their final game – a result which saw pre-competition favourites Dublin eliminated.

Luke Mitchell at full forward has been their main attacking threat and he scored six points in the win over Dublin.

Perfect really. They won their first four games against Offaly, Louth, Dublin and Westmeath to qualify with one game to spare.

They lost that final game to Wicklow but put out a weakened team so that lads would be fresh for this tie.

Will be firm favourites to make the final.

The most recent meeting between Laois and Meathwas last year in Round 1 of the Leinster qualifiers.

Laois had lost to Louth while Meath had been defeated by Dublin in Round 1 proper meaning both teams needed victory or they would be eliminated.

Laois trailed 0-6 to 0-4 at half time and despite playing with the wind in the second half, Laois fell five points down and looked to be on their way out of the championship.

But a Ciaran Comerford point kick-started their revival and they hit the last six points of the game to record a thrilling win – the last of them coming via Diarmuid Whelan.

There doesn’t seem to be any odds available from any of the bookmakers for this game.