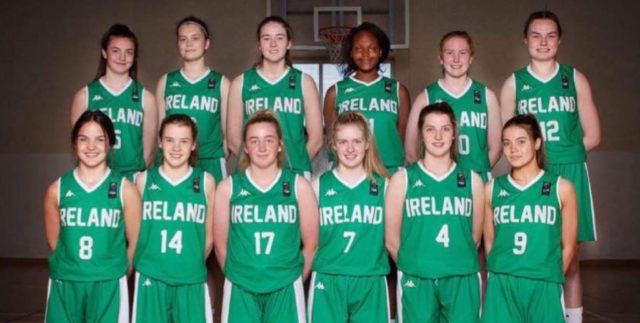 Three young basketballers from the Portlaoise Panthers Club have been selected on the Ireland U-16 squad for European Championships, which take place in Montenegro from from August 16th to 25th, 2018.

Portlaoise Panthers can proudly say that the have the largest representation of players on the Ireland squad, with Gillian Wheeler, Shauna Dooley and Ciara Byrne all playing on the 12-person squad, with Shauna captaining the side.

We spoke to Ciara’s father Ivan about the group of girls and how it feels for them to be representing Ireland at such a young age.

“There is a great group of about eight or 10 girls there that are involved in everything – from basketball to camogie to ladies football,” said Ivan.

Indeed, Ciara is involved with the Laois U-16 ladies footballers who booked a place in the All-Ireland final next Wednesday, but due to basketball commitments, the Scoil Chríost Rí student has been unable to play for the unbeaten Laois side.

“She had to make a tough call,” said father Ivan.

The Guard’s father also credits Scoil Chríost Ri and Portlaoise Panthers for promoting and investing in sport for women –  and you can’t mention sport in Scoil Chriost Rí without mentioning the honourable Pat Critchley.

“Ciara was always interested in basketball but her interest blossomed when she went to secondary school and having Pat train basketball with the girls,” said Ivan.

Only last summer Scoil Chríost Rí students Maeve Phelan and Claire Melia were part of the Ireland U-18 team that reached the European final.

This Saturday, Portlaoise Panthers are hosting a practice game between the Ireland U16 Girls team vs IT Carlow Superleague team at 2.30pm. This is a part of a training weekend for the Irish U16 team before they head to Montenegro.

On August 16 they start their campaign and take on Luxembourg in Podgorica at 6pm Irish time. The following day they play Romania at 1.45pm Irish time. Saturday August 18 sees them face Kosovo at 7.30pm Irish time while on Monday 20 they play Switzerland and Tuesday 21 sees them compete against Israel.

From there, Ireland will hope to make it through to the quarter-finals on Thursday, August 23.

LaoisToday will have updates from the championships throughout the tournament.