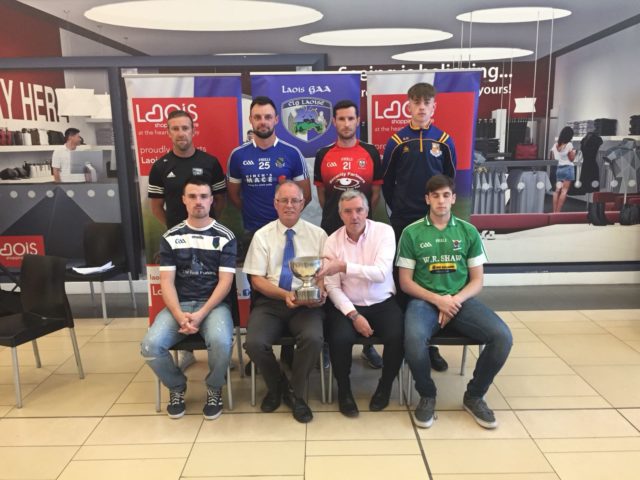 The battle for a spot in the 2019 Laois senior football championship begins this weekend with some enticing clashes down for decision.

The Laois intermediate football cahampionship begins with four Round 1 games this week and ahead of the competition we have profiled the eight competing teams.

It is quite possibly the most evenly contested Intermediate championship in a good while, with a number of teams in with a big shout of claiming the title.

Mountmellick Gaels and Courtwood will be considered as the bookies’ front two but one will have to make do with an opening round loss, while last year’s beaten finalists Portlaoise will need to negotiate a tricky opening round game against Rosenallis to open their campaign with win.

Newly promoted St Joseph’s will look to impress, but face a difficult task of beating to Timahoe to get off to a winning start.

And The Rock will do battle with Barrowhouse, last year’s relegation survivers, in what will be a tight affair.

League Form: Barrowhouse had a great Division 2 campaign, winning seven of their ten games and losing just three. That secured them a top four position, level on points with Clonaslee St Mamman’s and Courtwood, but they narrowly missed out on a semi-final spot on a head to head against the two teams.

Last year: Last year they found it tough get momentum going. An opening round loss to Portlaoise set them up against The Rock who narrowly beat them 1-9 to 0-9. That left them facing a tough task against Annanough in a relegation final, but they maintained their status thanks to a one-point win.

Team News: They perhaps lost their biggest scoring treat from last season, Eric Mackey, who transferred away to Graiguecullen. A young player they gained this season was Fergal Murphy, buthe has been hampered with a hand injury. Emmett Malone has made a return after two years and is likely to feature.

Prospects: They will certainly have to look to secure their status in Intermediate before looking further ahead but they can cause an upset. Keeping everyone fit will be a huge plus.

League Form: Courtwood had a successful league, and come end of the Division 2 campaign they found themselves in a semi-final against Clonaslee St Mammans, with a comfortable 5-12 to 1-15 win. That set them up for a final against intermediate rivals St Joseph’s where they were again comfortable winners on a scoreline of 4-14 to 1-8.

Last year: They began in good fashion, beating The Rock 1-11 to 0-12 and that win set them up against Rosenallis in Round 2. Rosenallis had three points to spare on that occasion, leaving Courtwood in a quarter-final against Timahoe. On that occasion they looked to be in a good position at half time but an inspired performance from Ruairi O’Connor – which saw him score an incredible five goals – ended their season.

Team News: Danny Luttrell is their only injury concern having picked up a recent injury but he should be able to feature.

Fixtures: Round 1 – Mountmellick Gaels in Portarlington at 7.30pm on Saturday, July 28.

Prospects: After last year’s championship, it was clear that Courtwood were missing some players in key positions. This year they welcomed a crop of young, talented footballers into the team and they have made a huge difference. Winning Division 2 will have brought a world of confidence to that bunch of players and that can be big come championship time. The first game will tell a lot, and by beating Mountmellick Gaels they will be laying down a huge statement.

League Form: Mountmellick finished third from bottom in Division 1B in what was a mixed league campaign, admittedly in a higher division than most of the intermediate teams with the exception of Rosenallis.

Come the end of the league, they were three points from relegated Crettyard. They picked up six wins and lost the remaining eight, and four of their six wins came in the last five matches meaning they finished strong despite a tough start.

Last year: There was high hopes that this amalgamation would work out successfully but it was anything but as an opening round loss to Ballylinan put them on the back foot straight away. A loser’s round loss to Arles Killeen would follow which landed them in the relegation semi-final against Clonaslee St Mamman’s Gaels. The were unable to stop the slide towards intermediate as they went down 3-15 to 2-11, and their faith was confirmed when a last minute penalty against Arles Kilcruise from Ross Munnelly relegated them to Laois’ second tier. Interestingly, they once again have Castletown players on board which will mean that if they do win the intermediate, they won’t be able to play in Leinster.

Fixtures: Round 1 – Courtwood in Portarlington at 7.30pm on Saturday, July 28.
Prospects: Being an amalgamated side down in the intermediate grade, it would be expected that Mounmellick would rise back to the Senior Championship, but it might not be as simple.

Courtwood in the first round will not be easy to win but they do have the ability to win it out if they can find a level of consistency.

League Form: Portlaoise’s second team were initially to compete in Division 2 for 2018 but they did not enter a side. A number of their intermediate team featured regularly in their Division 1A campaign with their seniors.

Last year: They came very close to claiming the intermediate crown last season, forcing Emo to a replay but ultimately lost out by seven points in the end. Portlaoise started well with a seven point win over Barrowhouse, then a second round loss to Emo meant that they would face The Rock in what would be a titanic two game battle in which The Town edged by a point over two games. They then secured a final spot with a win over Rosenallis, but couldn’t push that little bit further.

Team News: Craig Scully is out after breaking his ankle, while Aaron and Jonathan Rafter as well as Mark Staunton are away for the first round. It is unknown yet as to who will be called up to the senior side.

Prospects: If they manage to keep a strong side together, they will be there again towards the later end of the intermediate championship and looking to go one further on last season.

League Form: Rosenallis had a difficult life in Division 1B, finishing bottom and four points adrift of Mountmellick. Nonetheless, they claimed a few impressive results including intermediate rivals Mountmellick, and the eventual league winners Ballyroan Abbey.

Last year: They claimed a big opening round win against Timahoe and followed that up by beating Courtwood. Unfortunately, the dream ended when Portlaoise defeated them by seven points in the semi-final but it was an impressive start to life in the intermediate grade having only come up from junior.

Team News: Cillian Callaly is unlikely to make it back from England to play some part of their championship. There is no further injury or team news to report.

Prospects: A first round test against Portlaoise is always somewhat of an unknown quantity as you don’t quite know who they will line out but Rosenallis should be well equipped to get the win. They could cause a few problems for some of the favorites and their manager Johnny Irwin has had a good record of getting his sides in prime condition for the final.

League Form: St Joseph’s team have had a very impressive 18 months to date, finishing strongly in Division 2 last season, storming to an impressive Junior championship title and then this year backing that up with promotion to Division 1B.

They won seven of their league games, losing two and drawing one, qualifying them for the final, where Courtwood ended their dreams of another title with a resounding 4-14 to 1-8 victory.

Last year: It could only be described as a magnificent year for St Joseph’s second team, and a comeback by former All-Star Tom Kelly along with former Laois star Noel Garvan, gave serious leadership and experience to what is a relatively young side. They never looked under threat throughout and won it out with a succession of big wins.

Team News: Again like with Portlaoise, it will be a late call to see who will be available following the senior game. There is no injury news to report.

Prospects: They had a tremendous Junior A championship but it is hard to see them competing at the top end of the intermediate grade. If they manage to hold onto their key men for the opening round they could cause a shock against a Timahoe side who could be missing some of their main players.

League Form: The Rock had a solid Division 3 campaign but they will be disappointed not to secure a place in next year’s Division 2. They won seven of their ten games, losing two and drawing one. That put them in a semi-final against The Heath, but they proved too strong The Rock and ended their league interests.

Last year: They had an opening round loss to Courtwood, but followed that up with a three-point win over Barrowhouse. They then went on to face Portlaoise in the quarter final, and it took two games to separate the sides, with The Rock coming out on the wrong side by a single point.

Team News: Ciaran Carroll is suspended for the first round, while James McDonald will be hoping to pass a late fitness test to be fit for the opening game.

Fixtures: Round 1 – Barrowhouse in Stradbally at 7.30pm on Saturday, July 28.

Prospects: It is hard to see why they would be one of the teams in the hunt for the title. They are competing at the fourth tier of Laois league football and they were unable to get out of the division, but they should have more than enough to stay clear of a relegation scrap.

League Form: They had a mixed league campaign, winning five, losing four and drawing one. While that form suggests they are dropping back, it should be reminded that they have been missing a lot of key players such as Damien O’Connor and Brendan Quigley.

Last year: They had a disappointing start to the championship with a loss to Rosenallis, but they picked themselves up with a six point win over Annanough to set up a quarter-final clash with Courtwood. A big win over Courtwood, largely thanks to Ruairi O’Connor’s five goals booked a semi-final with Emo. That game went right down to the wire and it was just edged by Emo by a single point.

Team News: Brendan Quigley has not recovered from the injury that forced him to miss the entire inter-county season, while Sean Ramsbottom is still an injury concern. James Whelehan could be a doubt after picking up an injury, but his brother Conor has returned from America. Ciaran and Conor Lennon are both abroad and will miss the championship.

Prospects: Everyone will know that Timahoe probably have one of the best teams on paper in the intermediate championship this year. They have lost out against the eventual winners in the last four seasons in either the semi-final or final. This year sees them with one of the best chances to get back to Senior but it fully depends on the team they can line out.