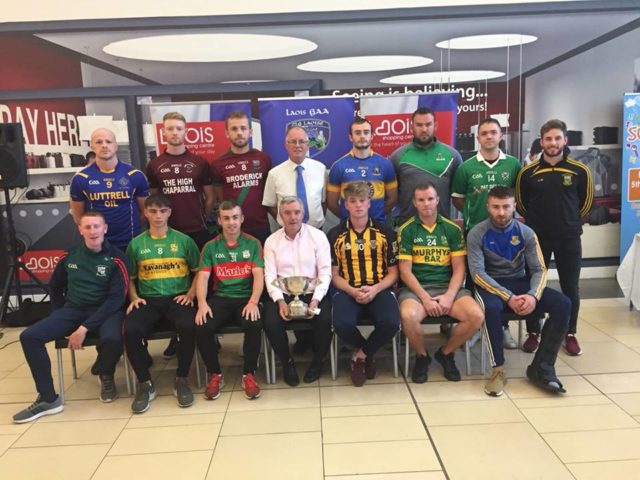 The battle for a spot in the 2019 Laois intermediate football championship begins this week with some enticing clashes down for decision.

The Laois junior football cahampionship begins with eight Round 1 games taking place between Thursday and next Monday.

And ahead of the competition we have profiled the 16 competing teams.

It is quite possibly the most evenly contested junior championship in a good while, with a number of teams in with a big shout of claiming the title.

Annanough will start the season as favourites as the side just relegated from the intermediate grade.

However, as Kilcavan and Park-Ratheniska will testify, getting out oh here tends not to be as easy as it seems.

There are some very strong second teams in this grade with the likes of The Heath, O’Dempsey’s, Graiguecullen and Portarlington all capable of doing what St Joseph’s did last year and claim the ultimate prize.

Check out the runners and riders below:

Last year: Erill are remarkable. They don’t play league but yet have won the last two championships they entered – Junior C and Junior B. They saw off Rosenallis in the latter last year.

Team News: Dan Bourke and Eoin Bourke are struggling with injury and unlikely to be fit.

Prospects: Really hard to know. Very difficult to step up two grades in two years and you’d imagine they will struggle.

League Form: After winning Division 5 last year, Camross reached the Division 4 final this year where they once again faced Rosenallis. The sides drew after extra time and will have to play again.

Last year: Ended up in a group with Park-Ratheniska, The Heath and Stradbally last year. Drew with Ratheniska the first day but they lost to The Heath and despite receiving a walkover from Stradbally in their last game, they missed out on a quarter final place.

Team News: Dwane Palmer is in America and Gearoid Burke has a broken finger.

Prospects: Will be favourites to win the first game and if they get knocked out of the senior hurling championship, it will be very interesting to see how seriously they take this.

League Form: Struggled at the bottom of Division 2 and ended up in a relegation play off against fellow junior side Kilcavan which they won to stay up.

Last year: Relegated from the Intermediate grade last year after losing to Barrowhouse in the decider.

Team News: Darren Maher is out with a knee injury.

Fixtures: Round 1 v The Harps July 26

Prospects: Begin the year as favourites and will be hoping to jump back up to intermediate at the first time of asking. New players like Killian Horgan, Damien McCaul, Ronan Stapleton and Barry Murphy will help here.

League Form: The Harps were in Division 4 but pulled out of it and were subsequently relegated.

Last year: Drawn in Group D, The Harps were out early after loses to eventual champions St Joseph’s and Ballylinan. Defeated Killeshin in their final game.

Team News: John Brophy and Tommy Moore are out injured.

Prospects: A very difficult assignment against the favourites and will be at the mercy of the success of their hurlers.

League Form: Topped Division 3 of the league and ended up in the final where The Heath came through a play off and a semi final to face them. In an epic encounter, Portarlington were edged out by four points.

Last year: Failed to get out of a group which contained Graiguecullen and Kilcavan last year. Defeated Ballyroan-Abbey but finished third.

Prospects: Will depend on what they lose to their senior team. If they can keep some players it will make them competitive.

Last year: In a three team group with O’Dempsey’s and Spink, Portlaoise lost both games and crashed out.

Prospects: Like all senior teams, will be vulnerable to the higher graded teams who may take their players. Will be hoping for a better showing than last year.

Last year: Very disappointing last year. Lost all of their games in Group B against St Joseph’s, Ballylinan and The Harps.

Team News: No injuries to report.

Prospects: Up against one of the teams who defeated them last year but have added some youth and look set to be a good deal stronger.

League Form: Operated in Division 3 and like Killeshin, finished exactly in mid-table.

Last year: Defeated Killeshin and The Harps to reach the quarter finals where they were well beaten by Park-Ratheniska.

Team News: Brian McEvoy is set to miss the first round through injury.

Prospects: Will hope to reach the last eight again but the outcome of the first game may have a big impact on their season.

League Form: One of the junior teams who operated in Division 2, Ratheniska did well in the early part of the league which meant they were never in relegation trouble and finished mid-table.

Last year: Progressed to the semi final but were well beaten by St Joseph’s. They lost the 2016 final to Rosenallis the year previous.

Team News: Paddy Kelly is out with injury while Podge Dunne is currently away travelling.

Prospects: This is Park-Ratheniska’s third season at this level since they were relegated from intermediate in 2015. Will be contenders once again though.

Last year: Made it all the way to the semi-final last year where they lost out to Kilcavan after a replay.

Team News: No injuries to report.

Prospects: Have to be considered one of the main contenders here once again as long as they can hold onto the majority of their team.

League Form: Very disappointing. Ended up in the Division 2 relegation play-off where they shipped a big beating against fellow junior side Annanough.

Last year: Lost to Graiguecullen in the group stages last year but went on an incredible run which took them all the way to the final. Here though, St Joseph’s just proved too strong.

Team News: Michael Tarpey has retired while Pat Gorry has moved away. In total, Kilcavan could be without as many as 10 players from the side which reached the junior final last year.

Fixtures: Round 1 v The Heath July 29

Prospects: Last year’s defeated finalists don’t appear to be going as well this year. Capable of turning it around though but face a very tough opener.

League Form: The only team in the championship that comes in here with silverware already claimed. They won Division 3 in some style against Portarlington a few weeks ago.

Last year: Qualified from their group but ran into St Joseph’s in the quarter final and were beaten by 10 points.

Team News: Aidan Bergin is out after he suffered a rib injury in a recent challenge game.

Prospects: The Heath were intermediate not too long ago and if they can hold onto the majority of the team that won the Division 3 final, they won’t be too far away.

League Form: Stradbally’s second team performed very well in the league and qualified for a semi final playoff against eventual champions The Heath – which they lost by two points.

Last year: Very disappointing. Lost to The Heath and Park-Ratheniska before giving a walkover to Camross.

Team News: Benny Lawlor and Ronan Maher are out while Colm Clancy is a doubt. It is hoped Sean Devoy will be fit.

Prospects: Like all senior clubs, will be at the mercy of the team above them as to who they will have in the end.

League Form: Ballyroan-Abbey finished fifth in Division 3, a year after their promotion from Division 4.

Last year: Very disappointing. In a group with Kilcavan, Portarlington and Graiguecullen, they finished bottom and lost all of their games.

Team News: Liam Delaney sustained a broken ankle in training and is out for the rest of the year.

Prospects: Will be hoping to do better than last year but will be at the mercy of their senior team as to who they retain come next Monday.

League Form: Are the lowest ranked side in the competition as they operated in Division 4 this year and finished mid-table.

Last year: Were in the group along with Portlaoise and O’Dempsey’s last year and defeated the Town to qualify for the semi finals where they lost to Kilcavan.

Prospects: Were intermediate a couple of years ago but have slipped considerably. Hard to see them progressing far.

League Form: Competed in Division 2 and ended up in a relegation playoff against Ballyfin. However, they received a walkover in that game to maintain their status for another year.

Last year: Qualified for the quarter finals but were then beaten by O’Dempsey’s.

Team News: No injuries. Boosted by the return of Michael Hande and Mark Doogue also.

Prospects: Serious contenders here again. Edged out in the quarter finals last year but will be back and raring to go here – unlikely to lose too many to their seniors either.