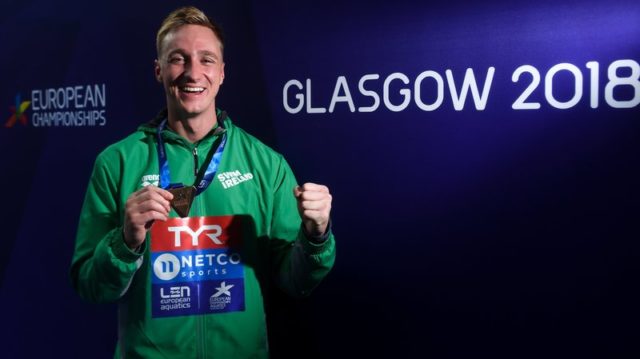 An Irish swimmer with Laois connections claimed a dazzling bronze medal at the European Swimming championships in Glasgow at the weekend.

Ryan was born in Pennsylvania, USA, but competes for Ireland through his father Tom’s Laois, or more specifically, Portarlington connections.

He completed the race in an incredible 24.64 seconds to narrowly edge Russian swimmer Vladimir Morozov by 0.05 of a second for third place and a much-coveted medal.

An incredibly high standard was set during the final, with another Russian competitor, Kilment Koselnikov, setting a new world record.

Backstroke-expert Ryan was disappointed to not make the 100m backstroke final, after finishing seventh in the semi-final on Sunday.

“I executed the preparation a little bit better,” said Ryan after his win. “The time wasn’t really there but that doesn’t really matter – you’ve got to bring hardware home to Ireland, that’s what really matters.”

SEE ALSO – Explained: The state of play in all the hurling championships after two rounds of action