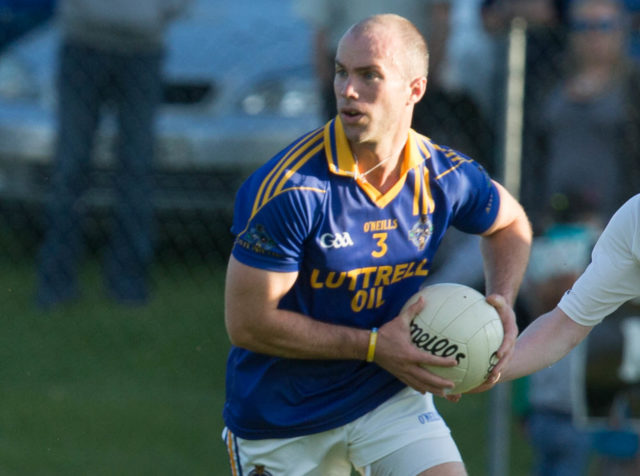 Annanough booked their place in the Laois JFC ‘A’ quarter-finals thanks to a four-point win over Graiguecullen in Vicarstown this evening.

In a good quality game, Annanough made the most of a good spell either side of half time to see off the visitors.

Graigue, who had beaten Spink in the opening round, got off to a good start here with early points from Mark Doogue, Bob Doogue and Alan Malone putting them three ahead.

Killian Horgan and James Miller responded for Annanough but John O’Neill responded for Graigue only for his score to be cancelled out by Robert Kinsella.

Mark Doogue then added another for Graigue but Annanough hit a purple patch and the first of John Scully’s four points followed by a point from Elliott Scully had the sides level.

Donal Miller then bombed over a big free way out on the sideline and then Killian Horgan got in for the game’s first goal after 18 minutes.

Bob Doogue hit back with a free for Graigue but Annanough led 1-6 to 0-6 at the break.

Three points early in the second half laid the foundations for Annanough’s win – from John Scully, Ciaran Hennessy and a punched effort from Donal Miller.

John Scully and John O’Neill then traded points before Thomas Brennann and Bob Doogue pointed to bring it back to four. A great Fergal Scully point extended Annanough’s lead and when Elliott Scully tucked away a penalty after sub David Booth was fouled the home side appeared to be stretching clear.

But Graigue came back and veteran John O’Neill buried a penalty to get them right back into contention following up on a Mark Doogue free.

A Donal Miller sideline kept Annanough five ahead and although Mark Doogue hit three points for Graigue before the finish, points from John Scully and Killian Horgan got the job done for Annanough.

They now go straight into the quarter-final in three weeks time while Graigue are into Round 3 in two weeks.

There were no less than six goals scored in this JFC winners round, with Portlaoise walking away eight-point victors in Rathleague tonight.

The Portlaoise forward are certainly in a rich vein of form and they have now scored 11 goals in two games after hitting Portarlington for six in Round 1.

Tadgh Ryan, Andy Dowling, Shane McManus, Fergal Fennell (who scored three against Port) and Brian Gaynor all stepped up with the goods for Portlaoise as Mick Nerney and David Fitzpatrick’s side continue their winning streak in this junior championship.

Elsewhere this evening in the JFC, Killeshin were 2-6 to 2-4 winners over Stradbally in the losers round, a result that sends Killeshin into Round 3 but ends Stradbally’s interest in the competition.