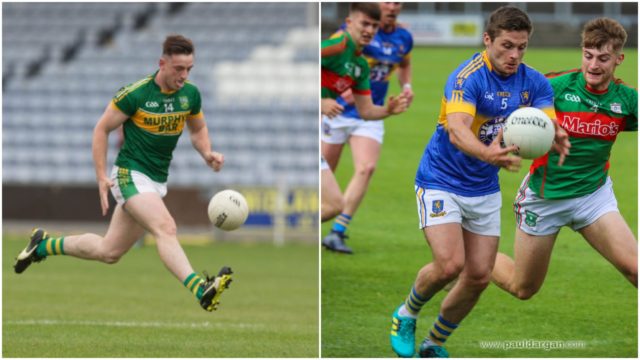 Ballylinan and O’Dempsey’s will have to meet again after playing out a thrilling draw in O’Moore Park tonight.

This is the second successive Laois SFC Round 3 game to finish level and these replays leave the County Board with something of a fixture headache next week due to the volume of games already scheduled for O’Moore Park.

This game was highly entertaining from start to finish and Ballylinan must’ve thought they had it won as they led by two points as we entered injury time.

But six minutes of that were played, owing to a serious injury to Peter O’Leary which resulted in a stoppage, and O’Dempsey’s came back and had the chance to win it with the final kick.

The first half produced 18 scores and Ballylinan got the first three of them via Gary Walsh, Alan Farrell and Liam Kealy.

O’Dempsey’s burst into this one after eight minutes though. Dan McCormack won a floated Conor Meredith ball and displayed dazzling feet to find a yard of space before firing into the bottom corner.

Micheal Finlay and Mark Barry added points and all of a sudden they were three points clear.

Jamie Farrell and Micheal Finlay traded points before the game’s second goal chance arrived for Ballylinan’s Ciaran Fennessy – but the teenager’s shot was saved by Podge Bannon with Gary Walsh pointing the resulting 45.

But Ballylinan did have their goal at the midpoint of the half. Gary Walsh had three shots blocked one after the other with the ball eventually falling to Ciaran Farrell who rattled the net.

Gary Walsh added another point but O’Dempsey’s responded with four Matthew Finlay points on the spin. Gary Walsh sent over a late free but Ballylinan trailed by 1-9 to 1-7 at the break.

Ballylinan started the second half like the first with a Larry Kealy point and then O’Dempsey’s received a further blow with the loss of O’Leary to a serious looking ankle injury.

They regained their two-point lead when Matthew Finlay swung over his seventh point but Walsh instantly hit back with his fifth.

Walsh, who was now free of the attentions of Peter O’Leary, levelled matters but Matthew Finlay replied with his eighth after 43 minutes to put O’Dempsey’s 1-11 to 1-10 ahead.

Ciaran Fennessy then had another goal chance but keeper Podge Bannon deflected his shot off the upright. The ball was eventually overcarried by an O’Dempsey’s defender and Gary Walsh tied up the game with 15 minutes to play.

Mark Barry kicked O’Dempsey’s back ahead after a blazing run and they went two up after 50 minutes when Matthew Finlay landed a free.

Gary Walsh cut the gap to the minimum again with a free and then he tied the match with 56 minutes on the clock to set up an exciting finish.

And then Ballylinan hit the front when Alan Farrell swung over one before his older brother Ciaran did the same as six minutes of additional time were announced with Ballylinan two ahead.

In the second minute of it, O’Dempsey’s left two in it when Conor Meredith’s floated ball was fisted onto the crossbar by Shane Nerney and went over.

And the Killenard men drew level after 65 minutes when Matthew Finlay smashed over a pressure free.

O’Dempsey’s had the chance to win it with the final kick but Brian Nugent’s effort just tailed wide and the sides will have to meet again.