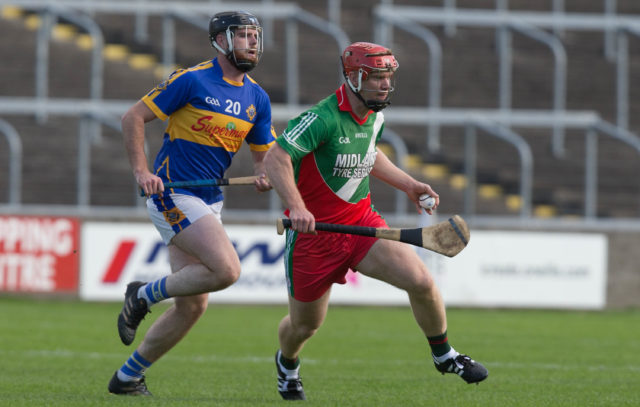 Brought to you in association with EQ Strength and Conditioning

In the build-up to this game it was noted that Borris-Kilcotton hadn’t recorded a knockout win of note since their famous Laois SHC final win in 2016.

But they put that one to bed with a massive win over neighbours Clough-Ballacolla to set up a semi-final meeting with Camross in two weeks’ time.

A first-minute goal from Stephen Dunphy set Terry Fahey’s men on their way and they built on a 1-12 to 0-7 lead at half time to eventually win by 18 points.

Aidan Corby did get the first point of the game for Ballacolla but Borris-Kilcotton hit back instantly – Stephen Dunphy applying the finishing touch for the game’s first goal.

The bustling Joe Campion added a point almost immediately and it was a lead that Borris-Kilcotton never gave up – or even looked like it.

Stephen Bergin and Willie Hyland pulled points back for Ballacolla in a lively start but over the next 20 minutes, Borris-Kilcotton stretched clear, outscoring Paul Cuddy’s side by 0-11 to 0-2. Crucially Borris-Kilcotton’s scores came from a range of sources – with Colm Stapleton, Paddy Whelan, Conor Kilbane, Stephen Finan, Aaron Dunphy, Stephen Dunphy, Joe Campion and three from PJ Scully.

Sean Corby and Willie Hyland accounted for Ballacolla’s scores in that period as the game got away from them and while Willie Dunphy and Stephen Maher got points before the break, there was still eight between them as they headed for the dressing rooms. And Borris-Kilcotton were full value for that lead.

Any hopes of a Ballacolla revival were buried within two minutes of the restart when Conor Kilbane struck for the game’s second goal and the life went completely out of it after that.

PJ Scully built on his tally with a string of points and the ever-improving Aaron Dunphy added a couple more, as did Conor Kilbane and goalkeeper Eoin Fleming from long range.

Stephen Maher got a goal back for Ballacolla late on but it was far too late to make a difference and a bad day was made even worse when John A Delaney and Willie Hyland got their marching orders with straight red cards in separate incidents in injury time.

And PJ Scully rubbed salt into the wound by adding a goal from a free with the final puck of the game.

For Ballacolla, a winter of soul-searching awaits. They came into the year as potential champions with no shortage of motivation following last year’s heart-breaking final loss. But they end 2018 with just one win from four championship games and defeats of 18 and 11 points in their last two outings.

Borris-Kilcotton now go forward to a semi-final meeting with champions Camross – a game where they’ll be looking to record their first ever championship win over the black and amber.