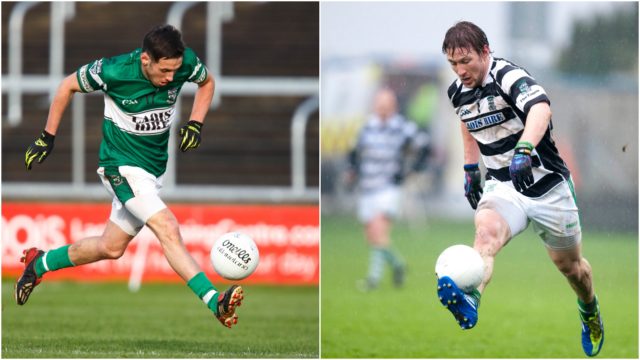 It’s hard to believe – and it’s probably a label neither will be overly keen on having – but on Sunday when the Portlaoise footballers bid for an 11th Laois SFC title in 12 years their two oldest players will be Craig Rogers and Cahir Healy.

Brian McCormack’s suspension and Brian Mulligan’s decision to not play football this year means that Healy and Rogers are the side’s two elder statesmen.

It’s the latest big game for two players who have been almost ever present for the past 16 seasons. Both, admittedly, did miss out last year – Healy through injury, Rogers by playing intermediate – but their service to the club and their medal haul is hugely impressive.

The same age, they have played countless times alongside each other over the years.

Well known within the club of their capabilities from a young age, they announced themselves to a wider audience in the summer of 2003 with the Laois minor team that would go on to win the All Ireland, Rogers as the side’s captain.

Still only 17, that was the year they broke through with the Portlaoise seniors – and they’ve been there ever since.

But they’d plenty of ball to play with the county before their remarkable club winning run took off.

Rogers was the county minor captain again in 2004, this time winning Leinster but losing the All Ireland semi-final to Kerry. At the time of a great Laois underage side under Sean Dempsey, U-21 was next up and Leinster titles followed in 2006 and 2007 – by which stage Healy was captain.

On both occasions Cork stopped their progress, after a replay in the ’06 semi-final, and then cruelly in the All Ireland final in Thurles in 2007.

At club level they claimed their first Laois senior football medal in 2004 under Tommy Conroy, Healy at centre-back in his first full year at the grade, Rogers at wing-forward.

That season they went all the way to the All Ireland final, winning the first of two Leinster club medals on the way. While they had a couple of club minor medals apiece by that stage, it was really only the beginning of their winning record.

Their medal haul is almost identical:

For good measure, Healy also has a senior hurling medal with Portlaoise in 2004, when they did the double, and two senior ‘A’ medals from 2015 and 2018.

The two have also had their turn in captaining the club footballers – Rogers in 2011 and Healy in 2014.

While both have played senior championship football with Laois, neither have been involved in recent seasons.

But that club record – when they’ve been alongside each other from Day 1 – has to be among the best in the country.

They’ll be hoping to add to it when they take on O’Dempsey’s in tomorrow’s final in O’Moore Park.

SEE ALSO – Celebrating one of Portlaoise’s most notable stalwarts