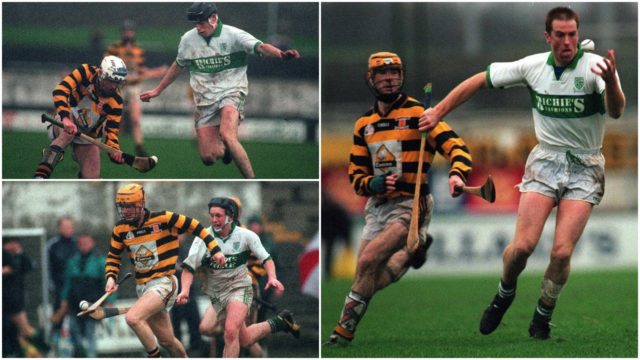 20 years from the last time the Portlaoise hurlers reached a provincial decider, Eamonn Fennelly’s men are on the cusp of doing so again.

Although the Leinster final that they reached in 1998 was a senior one, getting to the intermediate equivalent this weekend would be a serious achievement for a team who lost the first two games of the Laois championship this year.

Portlaoise face Ballinamere of Offaly in the Leinster Intermediate semi final on Saturday and ahead of that, we have taken a look back at the team which almost conquered the province two decades ago.

Back in 1998, Portlaoise began their club championship in the quarter final against Castletown in a closely contested game with Portlaoise winning out 2-10 to 1-10.

They then defeated Clonad in the semi final before beating The Harps in the final on a scoreline of 0-13 to 0-11.

Portlaoise were then straight through to the Leinster semi final where they faced Graigue/Ballycallan of Kilkenny in a low scoring game with Portlaoise winning out 0-6 to 0-5.

The Kilkenny side who Portlaoise defeated here could well play the Town in the final this year as they are in the other semi final against Fethard of Wexford.

But after a closely contested semi final in 1998, Portlaoise were through to the Leinster final where they faced Rathnure of Wexford.

Rathnure got the opening score of the game but it was Portlaoise who started off the better of the teams with a point from Tommy Mulligan and a goal from Brian Bohane who shortly after pointed from a free which gave Portlaoise a 1-2 to 0-1 lead.

Rathnure then added two points but Brian Bohane put Portlaoise three points ahead with his second point of the game.

After Portlaoise had their period of dominance Rathnure regrouped and scored 1-4 without reply.

A defensive error from Portlaoise left Rathnure man Austin Codd unmarked from a throw in, where he waited at the back, gathered the ball and soloed through before hitting the back of the Portlaoise net.

Brian Fitzpatrick got a point back for Portlaoise as teams went in 1-7 to 1-4 at half time with Rathnure in front. Portlaoise came out all fired up in the second half with Niall Rigney pointing from a free straight from the restart.

Rathnure responded quickly with three points and went five points clear of Portlaoise with the third one coming from the eventual man of the match Martin Byrne.

A free from Brian Bohane gave Portlaoise some hope but it was to be their last score of the game.

Rathnure added three more points to the scoreboard and ran out 1-13 to 1-6 winners and were crowned Leinster champions.

There are several connections from this team to the one that will take to the field in O’Moore Park on Saturday.

While two other players – Danny Browne and Tommy Mulligan – were part of the Portlaoise Junior C team which claimed championship glory earlier this year.

Check out some of the brilliant Sportsfile pictures from that day: