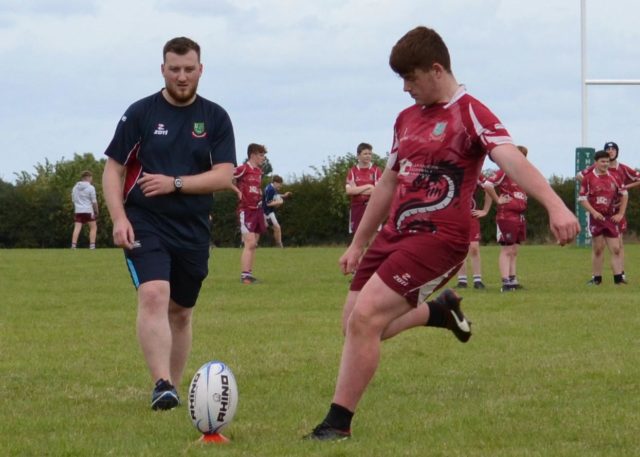 With most club teams taking to the field in the Leinster League last weekend there was a mixed bag of results but signs of progress for all sides involved.

The Club’s u16s were first up at Lea Road and they made it two wins and three loses for the season following a strong showing as they defeated Kilkenny 43-22.

The port lads got off to a flier with Ben McMahon scoring the first of his two tries after some excellent work from Tom Walsh breaking from Midfield.

This was followed up by two quick tries from Eoin Worrell, Port’s fullback, showing exceptional pace and agility, to leave the game 17-0 with only fifteen minutes gone.

Next to score for Port was Adrian McCann who finished off an excellent team try extending the lead to 24-0.  Kilkenny began to exert some pressure and were rewarded with an intercept try that was then quickly followed up with another leaving it 24-12 at the break.

Kyle Stacy scored a super individual try after Liam McCarty broke numerous tackles. Kilkenny responded quickly but Port once again showed their dominance and after moving the ball through seven pairs of hands, Ben McMahon scored in the corner to close out an excellent victory.

Man of the match was a deserved Darragh Jewell.  Next up for Port is Boyne away on December 1st.

The club’s u18s made the long journey to Wexford and although they were beaten 36-17 their coaches will be extremely pleased with a performance that really pushed the league leaders throughout.

The try scorers for Portarlington were Cian McCann, Glen Hassett and Adam Lambkin while Nicholas Doggett really caught the eye with a commanding performance at out half while James Bryan looked most dangerous in open play.

Elsewhere, the u14s were beaten 17-33 by a strong looking Midlands Warriors side. There were plenty of positives for Port though as this squad looks to find their feet at youths level.

Sunday saw both senior teams taking to the field. PortDara Falcons took on Navan RFC in Cill Dara having shared the points with the Meath outfit in the opening game of the season.

It proved to be a frustrating day for the Falcons as they completely dominated the first half and led 7-0 at the break but a series of injuries forced coach Cassie Dunne to completely reorganize her back line in the second half and in the end they did well to manage the situation and again share the points after a 7-7 draw.

The result maintains their top 4 position ahead of a trip to second placed Clontarf next Sunday.

The senior men have been showing significant signs of progress in recent week and they dominated at times in Sunday’s clash with league leaders Edenderry but ultimately fell to a 57-23 defeat.

Cormac O’Hora was best for Port on the day scoring two tries and showing some wonderful touches and control at out half while u18s player Séan Mooney scored his first senior try when coming off the bench to impress.