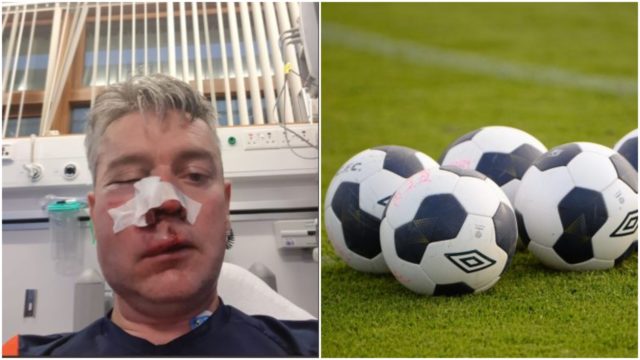 Last month, the soccer community was shocked by the events of a match in the Combined Counties Football League which left a referee in hospital.

During a league game between Horseleap United and Mullingar Town, official Daniel Sweeney was set upon during a violent incident.

The 50-year-old required lengthy surgery on a number of facial injuries.

The Combined Counties Football League subsequently announced that three Mullingar players were handed 40-year bans from all football activity in the FAI jurisdiction.

A former Mullingar Town player who took part as a spectator was already serving a lifetime suspension from playing for a previous assault. That has now been extended to all football activity under the FAI jurisdiction.

In addition, the club was fined €500 for failing to control its players and supporters, and that sum will go to the Daniel Sweeney recovery fund.

Mullingar Town will also have three match officials at their remaining games this season with a review to follow at the end of the season to determine if the sanction will be extended.

The first of those remaining games took place in Abbeyleix today as the Laois club hosted the side three divisions above them in Round 1 of the Combined Counties Cup – and won 4-0.

It was a superb display from a young Abbeyleix team who has only lost one game all season and are on the hunt for silverware on a number of fronts.

Mullingar Town struggled for numbers following the suspensions handed down to them recently but that doesn’t take from a great display by Abbeyleix.

Joe Bergin scored the opener within five minutes of kick off, finishing well after the ball broke to him following a scramble in the box. The scored remained the same until half time.

Abbeyleix came out all gun blazing in the second half, Killian Burke had the ball in the net soon after to put Abbeyleix 2-0 up, this was followed up with two excellent goals from Man of the Match Jamie Coffey.

Abbeyleix now progress to the next round where Rosenallis A await. The future looks bright for this young team.