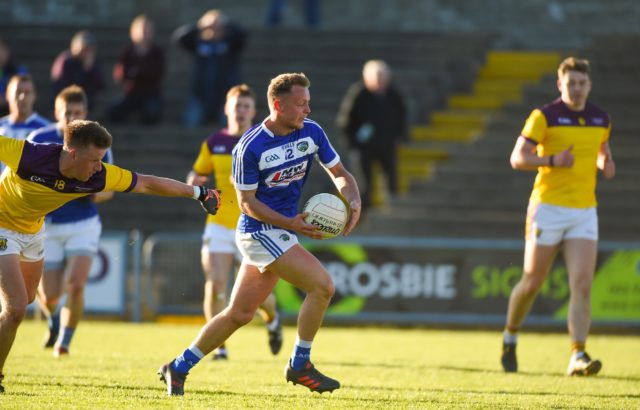 Last Saturday, the Laois senior footballers were to take on Wexford in Round 2 of the O’Byrne Cup.

However, torrential rain meant the pitch in Enniscorthy was unplayable and the game was postponed.

It has been refixed for tonight – just five days before Christmas – which many people think is absolutely crazy.

Laois lost heavily to Meath almost two weeks ago and they must win this game if they are to have any chance of progressing to the semi finals.

The venue for this game has been changed a number of times from Enniscorthy to New Ross – and it is now back in Enniscorthy at 8pm.

The team to face Wexford today shows 12 changes from the one that went down to Meath.

Just Denis Booth, Eoin Lowry and Martin Scully retain their places in the starting 15 from the last game.

Booth and Scully are once again at full back and wing forward respectively while Lowry has moved from corner forward to centre forward.

Meanwhile, there is a debut for Lowry’s younger brother Evan in the full forward line alongside Evan O’Carroll and Colm Murphy.

After being cut from the squad last year, St Joseph’s James Kelly is back in the full back line.

Meanwhile, less than a year after announcing his retirement, Arles-Kilcruise midfielder Kevin Meaney is back and he partners Rory Bracken.

On the injury front, Sugrue is still without Ross Munnelly and Alan Farrell – while he must now also plan without Darren Strong who has announced his retirement.

He will also be without the Portlaoise lads until the new year.

Laois have fond memories of their last game against Wexford back in the summer in Round 1 of the Leinster championship.

Trailing by ten points at half time, Laois pulled off an amazing comeback which saw a late Gareth Dillon point force extra time.

Laois went on to win the game in that period before defeating Carlow and Westmeath to reach their first Leinster final since 2007.

Laois’s next game against Louth will take place in January.