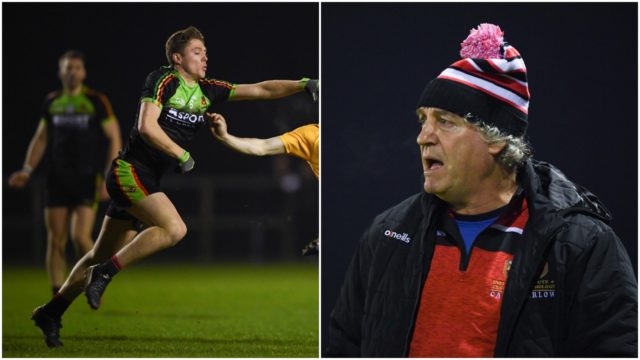 It was a very good day for Laois lads involved in the Sigerson Cup as all three teams with O’Moore interest advanced to Round 3.

IT Carlow, who are managed by Portlaoise’s Pat Critchley, came out the right side of a bruising encounter with Cork IT.

Park-Ratheniska’s Richie Hitchcock was full back with Stradbally’s Eoin Buggie centre back but Graiguecullen’s Trevor Collins was absent through injury.

There was very little between the teams in the early stages but IT Carlow finished the game strongly to win 0-18 to 0-12 in the end.

That strong finish was thanks in no small part to Ballyroan-Abbey’s Diarmuid Whelan who came off the bench and kicked three second half points.

They defeated Athlone IT by 4-14 to 2-8 to make the next stage. IT Tralee, who have Portarlington’s Jake Foster as part of their panel, trounced Sligo IT 6-20 to 1-9 to advance.

And tonight’s results set up some very tasty matches that will take place next Wednesday.

IT Carlow will travel to University of Limerick – who have Portlaoise defender Frank Flanagan in their full back line.

Shane Nerney’s Garda College will host NUIG while St Mary’s will play host to IT Tralee.

While the final Round 3 tie will see Laois interest on both sides as Evan O’Carroll’s UCD host the aforementioned DIT.

The winners of those games will advance to the quarter finals and their potential opponents can be found below.