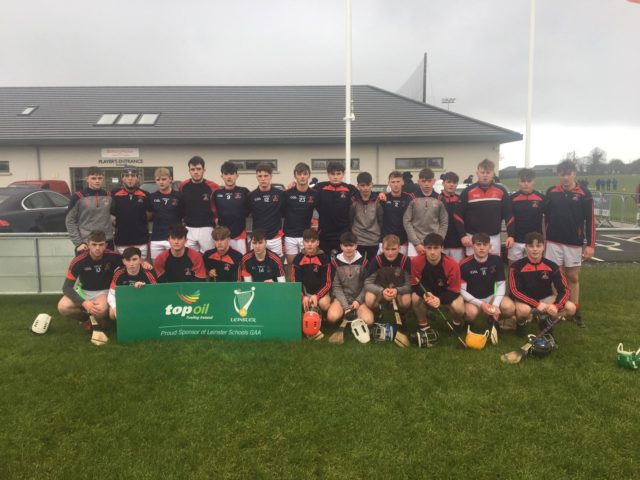 Nine frees from Ballinamere/Durrow man Brian Duignan were enough to signal the end of Mountrath CS’s Leinster final dreams today in the Faithful Fields Centre of Excellence in Offaly.

Indeed frees took over the second half of today’s game – with nine out of the thirteen points in the half coming from placed balls.

Duignan got Colaiste Cholm out of the starting blocks first and began his free-scoring campaign after one minute of play.

He added another free as thrown balls were cracked down on with force today – with six frees in total being given for the offence.

Mountrath got on the scoreboard after eight minutes from a long-range free from full-back Bryan Bredin.

Tullamore gained substantial possession from loose marking on puckouts while Mountrath’s full-back line did well in rucks and earning frees around their 45′.

Jack Byrant secured the first point from play after 14 minutes while Mountrath CS goalie Finnian Cuddy did well to stop a near-certain goal by taking on Byrant who was waiting on the edge of the box.

It was 21 minutes before Mountrath got their first score from play – with Tadhg Cuddy sending it across to corner-forward Adam Kirwan who struck it over.

Bredin continued to impress on long-range frees, converting one more before Mark Dillon replied with a free of his own on the 45′ to put Colaiste Cholm two ahead at half-time – 0-5 to 0-3.

Duignan got the scoring off to a start after five minutes before Kirwan stepped up in front of the posts once again.

Camross man Robbie Delaney answered for Mountrath CS after 48 minutes with a fine point from the right-wing.

Colaiste Cholm substitute Stephen Fitzgerald made his mark on the game from the time he stepped onto the pitch – catching a puckout and soloing through before delivering the ball off to Sam Burke who struck it over.

Kirwan and Fitzgerald traded points before Daniel Delaney added a point from a free to cut the deficit back to six.

However Colaiste Cholm looked like the stronger team throughout the second half – with another signature long-range free from Duignan to signal the end of scoring in the Faithful Fields today.