The Laois senior footballers got back on track in Division 3 of the National League against Sligo in O’Moore Park.

The O’Moore men won every game in Division 4 last year and after beating Down in Round 1, they were rocked by Louth last weekend in Croke Park – losing for the first time.

But they got back to winning ways here and here we will look at some of the main talking points from the game.

Where to begin. First of all, you would have to question the wisdom of the GAA in appointing a referee to officiate a game in a Division in which the county he is from are also taking part.

We all know refereeing is a tough job but Smyth enraged the Laois crowd on several occasions, particularly in the second half. He continually ignored the new kickout rule which states the ball must travel 20 metres as Sligo routinely didn’t and then he flashed two controversial cards Laois’s way.

The sending off of Marty Scully after 55 minutes was certainly the worst of them. But he and Gerard O’Kelly-Lynch went full on for a 50/50 ball in a massive collision that left both men requiring treatment on the floor. And when they both got to their feet, the referee awarded Sligo a free and brandished a straight red for Scully.

And is if that wasn’t bad enough, he then handed debutant Sean O’Flynn a black card that looked extremely harsh to ensure Laois would play the remainder of the game with 13 men.

All in all it wasn’t a good day for the man in the middle and Laois fans will be hoping they don’t see him again.

The O’Dempsey’s man took the club championship by storm last year and he showed a glimpse of what he is capable of in his debut from the bench against Louth last week.

But Laois fans were treated to the full experience of Barry today and he didn’t disappoint. His vision is brilliant and he played an instrumental part in a number of Laois scores – including the first goal for captain Stephen Attride.

He then kicked a great point before being substituted after 59 minutes. We look forward to seeing plenty of the teenager this year.

Laois were without the suspended Kieran Lillis for today’s game and with Timahoe’s Brendan Quigley not fully fit yet, manager Sugrue was faced with a bit of a selection dilemma to see who would partner John O’Loughlin in midfield.

Arles-Kilcruise’s Kevin Meaney had not seen any action so far this year since coming out of retirement but he was in from the start today and acquitted himself very well. He was very disciplined in the tackle and will certainly provide Laois with an extra option this year.

Evan O’Carroll continued his brilliant start to 2019 today. After kicking 1-7 for UCD in their Sigerson Cup win over DCU on Wednesday, he was restored to the Laois starting team after being rested for the Louth defeat last week.

And he was immense again. He finished the game with eight points and has really made that full forward position his own – feeding off some great balls from Donie Kingston and Conor Boyle. Long may it continue.

Laois were wide open at the back against Louth last Saturday and there certainly seemed to be a better shape to what they were doing today. The positional switch of Gareth Dillon back to corner back and the inclusion of Colm Begley from the start also helped them a lot.

And Laois certainly funneled more men back behind the ball when they lost possession than they did last week. All of those things combined well for Laois. They won’t be happy with conceding two late goals though so there is still work to be done in that respect.

In three league games so far, manager John Sugrue has now used a total of 26 players. And with the likes of Mark Timmons, Trevor Collins and Brendan Quigley still yet to play this year, Laois have assembled a very strong squad now.

Competition for places is now really high and that can only be a good thing for the team going forward.

After last week’s outrage in Croke Park where soup and sandwiches were withheld from Laois journalists, we were delighted to have our home comforts back this weekend.

Pat O’Sullivan and the Laois GAA PR team provided us all with a cup of tea, a selection of sandwiches and biscuits which are very much appreciated by members of the media. Thanks lads!

After last week saw a very small crowd travel to Croke Park for Laois and Louth, it was great to see a good Laois crowd in attendance today.

The players appreciate it and it is good to see that the feeling that was generated on last season’s run is still there.

9 – Other results and league table

It was a very good day for Laois as results in the other matches has seen them rise back up to second place in Division 3.

Down defeated Westmeath by 0-10 to 0-9 last night while Longford stunned Carlow in Netwatch Cullen Park with a 1-11 to 0-9 win today.

Offaly thought they were on course for their first win of the season but an own goal after 75 minutes gave Louth a 2-10 to 2-8 win. 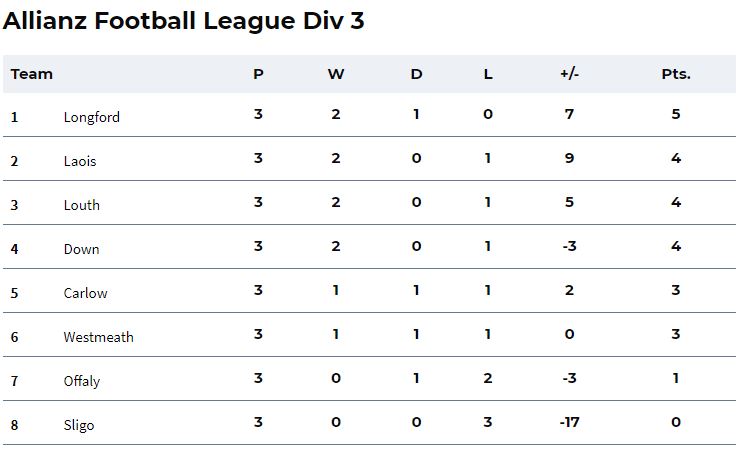 Laois have a week off now before they are in league action again.

John Sugrue’s men are back on the road on February 24 when they travel to Mullingar to face Westmeath.

This will be the first of four midlands derbies as Laois play Longford, Offaly and Carlow in their remaining games.