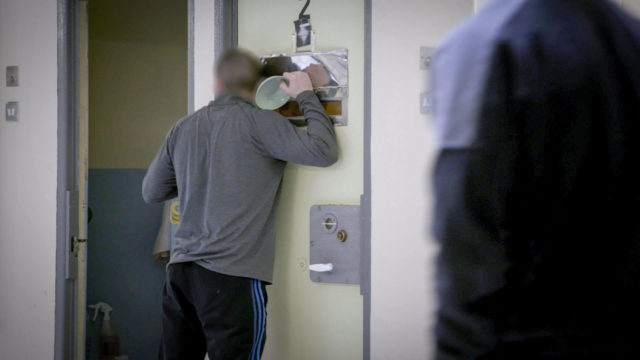 On Monday last week, LaoisToday was among the media invited into the Midlands Prison in Portlaoise.

We were given exclusive no-holds-bared access to the prison itself.

TY Work Experience student Bronagh Scully from Ardscoil na Trionoide is in with us at present and she came along for the trip.

On Monday, LaoisToday had the privilege of visiting the Midlands Prison Portlaoise in light of Virgin Media One’s new four part series ‘Inside Ireland’s Biggest Prison’.

Upon arrival, we all had to put our phones in lockers and walk through a metal detector. We then got to meet the Governor of the prison Ethel Gavin and Assistant Chief Officer Jack Fahey.

All of the prisoners are given skills and knowledge to give them a chance in the outside world so they won’t re-offend. The 42 teachers in the prison educate the prisoners on literacy, metalwork, woodwork and home economics.

Without question the most eye-opening experience for me was visiting the cells and getting to walk among the prisoners.

We were first taken to B3, a wing for well-behaved prisoners known as ‘enhanced prisoners’ who had proved themselves to be trustworthy. This system was put in place as an incentive for prisoners to behave.

We visited during dinner time so many of the men were milling around as they collected their dinners from the kitchen and brought them to their rooms where they eat all their meals.

Admittedly I was nervous to walk among criminals but the prisoners on this floor proved to be polite and friendly. It struck me that these men were are more than just prisoners – they are husbands, sons, friends and fathers.

As we walked through B3, I glanced into a few of the cells. I was surprised to see posters, guitars and Manchester United cushions.

This was a stark contrast to my vision of a cold, dark and bare prison cell. This floor also had a library and a training room, both of which are luxuries for enhanced prisoners only.

Next we were taken down to B1 which is located on the ground floor so it’s easily accessible to the prison officers if a fight breaks out.

The prisoners on this floor weren’t quite as trusted as those in B3 and we all felt quite uneasy. The prisoners were fascinated so see young females, no doubt a rare occurrence in a male prison. The amenities on B1 were far less luxurious than B3.

The school area of the prison had a bright and cheery atmosphere, with amazing paintings by the prisoners themselves displayed on the walls.

With 42 teachers working at the prison, a variety of subjects including literacy, metalwork, woodwork and home economics are taught.

Home economics is very popular as the prisoners are eager to learn how to look after themselves once they are released.

I then got the opportunity to visit the new National Violence Reduction Unit (NVRU). We were the second group to ever visit this unit, following Minister Charlie Flanagan.

The cells in this unit are far more secure than any other as the prisoners are seen as being the biggest threat to safety in prisons – due to their involvements on assaults on prison staff and other prisoners.

We were taken to the common room of the NVRU, where the television is bolted to the wall and the table and chairs are bolted to the floor.

From this room we could hear one of the four prisoners singing along to ‘Time To Say Goodbye’ in his cell. It certainly was a surreal experience to be among some of the most high risk criminals in the country.

After that it was time for a bite to eat and a chance to reflect on an incredible day with the other members of the trip.

It certainly was a life-changing experience.