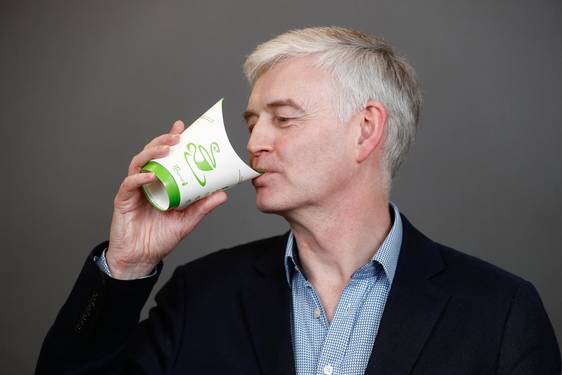 Entrepreneurs, inventors and investors are always on the lookout for the next big thing.

With climate change and the plague of plastic swamping the planet, businesses are becoming acutely aware that they had better go green or go home.

Enter Ballybrittas businessman, Tommy McLoughlin, who may well have hit on the next big thing, with his development of a prototype plastic free, fully recyclable coffee cup. It sounds promising and it could be huge on so many levels.

Tommy McLoughlin is now heading up a Laois eco-firm which is pioneering the ‘Buttlerfly Cup’ which if embraced by the big corporate players could see the clever idea with the catchy name become as it were, the world cup.

“The Butterfly Cup is the most environmentally friendly disposable cup in the world,” Tommy McLoughlin told the Irish Independent this week.

From a well-known Jamestown, Ballybrittas family, Tommy McLoughlin, an accountant by professiona and the main investor in Hanpak, which trades as Buterfly Cup, believes that the product is set to revolutionise the beverage world with its unique design.

The plastic that pollutes the environment from the mind boggling 250 billion disposable cups used every year has become a massive issue for eco-activists, consumers and fast food and beverage brands worldwide.

To serve up a solution for a ready-to-go society and the corporate sector would be a big deal indeed.

The Ballybrittas businessman, Tommy McLoughlin told the Irish Independent that the Butterfly Cup is coming to the market at just the right time, and has all the hallmarks of a perfect win-win situation for the Laois based company.

“It will take a while to feed in to the supply chain but all the indications that we are getting are that the big brands are looking to change,” he says.

“This is beginning to really catch fire. Plastic straws and the damage they do to the environment became a huge issue for people last year and that has really put the focus on the issue of disposable plastic straws and cups,” Mr McLoughlin told the Irish Independent.

“We are talking to most of the big guys around the world and we are at various stages in the approval process. One major quick service restaurant is to trial the coffee cup in the UK and another in Indonesia to see what customer reaction is,” he explained.

The Butterfly Cup concept has emerged from The NextGen Challenge, a worldwide collaboration between some of the biggest fast food and coffee chains and the World Wildlife Fund to try solve the environmental challenges surrounding the disposal of single-use plastic coated paper cups.

Butterfly Cup has been shortlisted from the 480 entries received from over 50 countries.

“Of all the five concepts that have been shortlisted we are actually the only one with a fully developed product that eliminates both the plastic lid and the straw, so we are in with a great chance of winning,” outlines Tommy McLoughlin.

The design – invented by McLoughlin’s partner, Joe Lu – eliminates the need for lids or straws and it works for both hot and cold beverages.

The eco-friendly nature of the cup has been further enhanced by a development in the Finnish paper industry where a huge magazine plant has been converted into a new paper mill to produce a special kind of paper than can be used in drinking cups, without using any added plastic or resin.

That means that the Butterfly Cup biodegrades quickly and can be recycled along with regular paper. This says Tommy McLoughlin, is the holy grail that no other disposable cup manufacturer has yet to bring to market.

Two patents underlie the design and are the key to stopping it being quickly copied by imitators.

So watch this space, and if Laois man Tommy McLoughlin has any say in the matter, it won’t be filled by plastic cups!