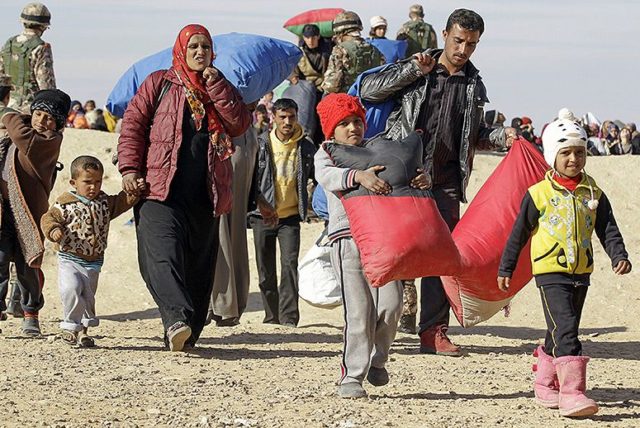 Over one hundred Syrian refugees will be accommodated in Laois later this year.

The Department of Justice and Equality has advised the local authority that 110 refugees have been allocated to Laois County Council for housing in 2019.

This follows on foot of the Irish Refugee Protection Programme established in 2015 where Ireland agreed to accept four thousand refugees under the UNHCR Resettlement and EU Relocation Programmes.

The allocation of refugees to Laois comprises of 22 families. This in turn will require the delivery by the Council of seven 2-bed houses; eleven 3-bed units and four 4-bedroom homes throughout the county.

The supply of the 22 homes will be part of the local authority’s ‘Rebuilding Ireland’ home delivery targets for this year.

The information was set out to councillors at their February monthly meeting today by the Chief Executive, Mr John Mulholland.

While there was a consensus that there should be a warm welcome for the refugees and that Laois would step up to its responsibilities to help the families from war torn regions such as Syria, there were some reservations expressed about the priority of ‘local’ families on the housing list.

Cllr Aidan Mullins asked if the 22 refugee families were being housed out of the Council’s own expenditure budget or was there special funding available for this purpose.

His colleague Cllr Caroline Dwane-Stanley had concerns about families who had been waiting for housing for years.

“I have no issues with us stepping up to the plate to help refugees. But I am concerned that the houses that are to be provided are coming from our own Council housing stock and our own people and local people are waiting to be houses in some cases since 2013.

“Why in the name of God are we not getting special funding from the Department? It’s not a them and us situation, these people need our help.

“It’s not the Council’s fault and we have the Minister for Justice, Charlie Flanagan, living in this town and we should have a meeting with him and we should not be housing anyone at the expense of our own people. Nobody should skip the queue,” said Cllr Dwane, who sought a breakdown of the houses provided by the Council for refugees.

Cllr Pauline Madigan sought clarity on the funding status for housing refugees but said it was important that they were welcomed with open arms to be made feel part of the community. She said that inclusivity and diversity was important as these families were coming from horrendous conditions.

When it comes to talking about refugees and “our own people”, Cllr Noel Tuohy said he didn’t like that kind of language. He said that the Irish had emigrated all over the world and all they ever looked for was “fair play”.

“Everyone should be treated the same and if refugee families are prioritised then there should be special funds provided to do so. They have the same rights as everyone else and I would say there is no man or woman here on this Council with a racist bone in their body.”

Cllr John Joe Fennelly too felt they should seek additional funding from the Department to help house refugee families.

Chief Executive Mr Mulholland outlined that the refugee families are coming from very difficult war torn areas. They will be vetted by the Gardai during the summer and then spend time in orientation centres most likely in Wexford or Waterford before coming to live in Laois towards the end of the year.

He said the housing provision for refugees is included in their Rebuilding Ireland funding from the Department of Housing and Local Government.

“In the meantime we have to prioritise this as part of our own housing provision through direct build, leasing, approved housing bodies or HAP,” he explained.

Director of Services for Housing, Mr Michael Rainey pointed out that there was financial support available from the Department of Justice to assist with the refugee programme for the Syrian families due to relocate to Laois.

He said that a grant application was currently being prepared by his office and this would be for about €250k to assist with integration and interpreters and such matters.

On a separate matter in relation to the provision of social housing in Graiguecullen, Mr Rainey told Cllr Ben Brennan that he expected Laois to acquire 20 housing units from the new development on the Ballickmoyler Road.

These would be 3-bedroom homes allocated to those on the housing list.

“These houses are badly needed and I hope we will be housing Laois people first and not people from other counties. These should be houses for Laois people, not outsiders,” insisted Cllr Brennan.

SEE ALSO – In Pictures: An evening of glamour at the Portarlington Gala Ball