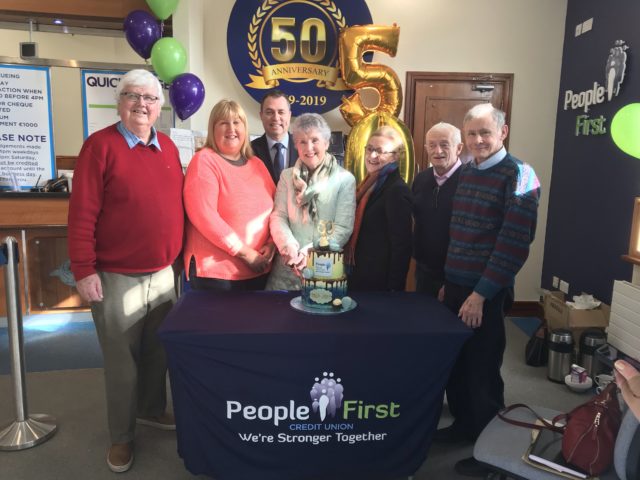 A long-standing Portlaoise institution is today celebrating the 50th anniversary of the day they first opened for business.

People First Credit Union in Portlaoise – which now also has branches in Stradbally, Athy and Abbeyleix and are due to open in Ballinakill this weekend – today marked the occasion with a coffee morning in Portlaoise where staff, customers and past and present board members gathered to mark the occasion.

Phil Coughlan, a board member for 40 years prior to stepping aside, was on hand to cut the cake while 89-year-old Dick Sydes, another great champion of the community – be it Portlaoise GAA, Credit Union or with various hospital support groups – was also present.

Dick was on the board for 37 years.

CEO of People First Credit Union Sean Dunne was in attendance too as was Belinda Gyves who is currently in charge of their marketing.

Portlaoise Credit Union started out in a rented office on Main Street in the spring of 1969 before moving to different locations on the New Road and in Lyster Square and then to their current custom built branch on James Fintan Lalor in the early 1990s.

The current chairman is Kieran Brosnan while the secretary is Clive Davis.

Among the past and present members there were Elsie Cummins, Marian Shalloe, Frank Cummins, Billy Fitzpatrick and John Dowling.