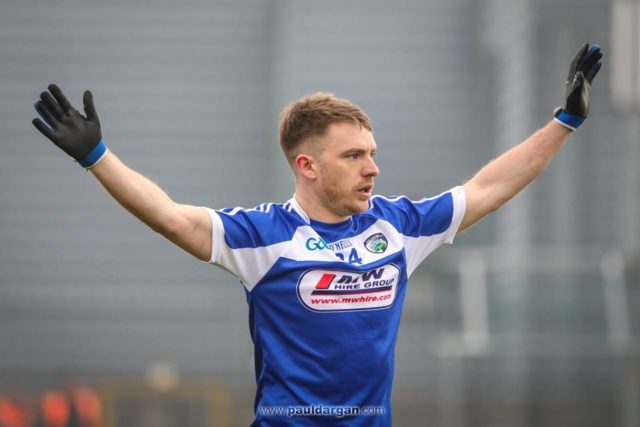 Laois take on Longford in Round 5 of their Allianz Football League Division 3 campaign this evening.

The game throws in at 7pm in O’Moore Park, Portlaoise.

Following on from the loss against Westmeath last weekend, manager Sugrue has made six changes to the starting team.

There are first appearances of the season for Portlaoise’s Benny Carroll and Graiguecullen’s Mark Timmons.

Carroll has not played since injuring his quad playing for Portlaoise last year and this will be his first game since then.

Meanwhile, Timmons was named to start in the first game against Down but suffered an asthmatic attack the night before and has been sidelined ever since.

Portarlington’s Sean Byrne, who went off injured in the first minute of the Round 2 loss against Louth, also returns to the side while Ross Munnelly, who top-scored in that defeat to Louth, is also in from the start.

Robbie Piggot is also back after his injury lay off too while Kieran Lillis comes back into midfield.

Longford have not yet named their team.

What have Longford been like in the last couple of seasons?

Longford have been in Division 3 since they got promoted from Division 4 in 2015.

Back then, they defeated Offaly in the final in Croke Park and they have remained in Division 3 ever since.

They went close to promotion last year but ended up third behind Armagh and Fermanagh.

Laois and Longford met twice in 2017 when Laois were under the guidance of Peter Creedon.

And Laois emerged victorious on both occasions. They defeated Longford by 1-13 to 0-13 in Division 3 before ultimately losing to Offaly and being relegated.

And Laois repeated the trick in the championship later that year as Paul Kingston inspired them to a 4-15 to 0-16 win in Round 1 of Leinster.

Conor Lane from Cork is the man in the middle.

There are two other Division 3 games set to take place on the evening.

Leaders Down host Offaly at 7pm while Carlow take on Louth at the same time.

On Sunday, Sligo will face Westmeath.

No there is not.