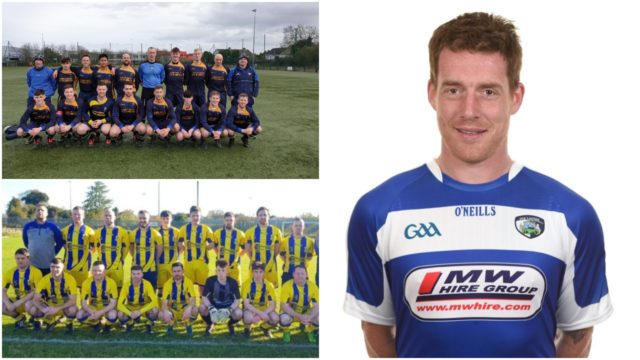 The number of Laois teams in CCFL soccer action today may have been down – but there was still a couple of hugely important fixtures.

We have reports on the wins for Abbeyleix, Mountmellick United and Rosenallis as well as all of the weekend’s CCFL results from around the region.

Abbeyleix are through to the last four of the Leinster Junior Shield following a fantastic 3-0 win in Finglas on Saturday.

Abbeyleix were quick out of the blocks and were comfortable early on, Terry Lawless was solid in the middle, controlling the play with Aaron Carroll beside him moving the ball wide with every opportunity.

The breakthrough came on 25 minutes with Joe Bergin racing onto a ball out on the wings and putting in a great cross which the Bohs SC defender allowed to slip through his legs, Jamie Coffey was waiting unmarked and finished well to the net to put Abbeyleix one up.

Abbeyleix continued to dominate with veteran keeper Ronan Moran rarely tested, his back line captained by Dean Byrne marshalling the defence, with Eoghan Fennely and David Brennan either side reducing the home team to very few efforts on goal.

Just before half time Abbeyleix went two up, the ball falling in the square from a cross there were efforts for Leon Bradish and Jamie Coffey well blocked before the ball fell to Aaron Carroll who finished well to the net.

Into the second half the home team started to up the pressure and Abbeyleix were slower to get moving than their super 1st half start.

Some long aerial throws from the Bohs full back were dealt with and Abbeyleix started to tick again, this team play an excellent brand of football playing out from the back using wide men to stretch the opposition.

Following some great touches by Jamie Coffey out wide the ball eventually broke to Oisin Carrol in the box who looped a great shot back over the stranded Bohs back line to record his first goal of the season.

From here it was plain sailing for Abbeyeix but some solid defending and a good parry from keeper Moran ensured the clean sheet was intact.

Going forward Abbeyleix were unlucky not to extend their lead with Joe Bergin and Dan Coffey going close.

Abbeyleix performed well all over the field from one to eleven, with all players introduced playing their part also. Aaron Carroll pick up the man of the March award.

Former Laois footballer Darren Strong was Mountmellick United’s hero as his last gasp strike saw them advance to the next stage of the CCFL Cup.

While Strong’s screamer was the winner, it was the performance of Mountmellick striker Mark Grennan that really caught the eye as he bagged a hat-trick.

Mountmellick began the tie well as Grennan scored the first of his goals but the visitors scored twice before half time to take a 2-1 lead at the interval.

In a game that had to be stopped twice due to hail stones, Grennan looked to have won the game with two more strikes that regained the lead for Mountmellick.

However, Clara refused to go away and leveled the game once more. It looked like we were heading for extra time but Strong hd other ideas as his effort which nestled in the top corner settled the tie.

This game was played on Friday night under lights in Edenderry and saw Clonaslee take on a Derry Rovers side who operate a division above them.

Clonaslee started the game like a train and found themselves ahead after 15 minutes when Ger Reilly netted from a corner.

Derry Rovers responded with a free-kick two minutes later but Clonaslee would twice more in the following ten minutes.

Teenager Jack Owens regained the lead before John Rigney’s cross from a free kick evaded everyone and nestled in the corner of the net.

Clonaslee were in dreamland but they couldn’t hold out until half time. Derry Rovers scored twice in the final five minutes of the first half to leave it 3-3 at half time.

Derry Rovers had the wind in the second half but the game remained deadlocked until the hour mark when a scramble in the Clonaslee box resulted in the unlucky Ger Reilly putting through his own net.

Clonaslee pushed for the equaliser and James McRedmond went close on two occasions but was very unfortunate not to find the target.

And right at the death Derry Rovers made the game safe with their fifth goal to end the contest.

Rosenallis kept themselves in the hunt for the Division 1 title with a confident 3-0 away win over Offaly side Coolraine.

The victory sees Rosenallis gain revenge over the side that defeated them in extra time in the cup recently.

Rosenallis started strongly and were awarded a penalty within 10 minutes when Donagh Calally was taken down in the box. Paul Dunne stepped up and made no mistake.

Mark Dunne and Marcus Redmond controlled the game in the middle of the field which allowed Rosenallis to dominate the game for long stretches. Coolraine were limited to long balls, which the Rosenallis defence handled well.

The second half continued in the same way, with Rosenallis creating more and more chances. Eventually, Donagh Calally walked through the defence and around the keeper to finish the game off.

Coolraine had a few half chances after this but the game was put to bed when the Coolraine keeper sliced a clearance straight to Niall Doolan who didn’t hesitate, hitting it first time, and burying it over the keepers head and into the back of the net.

A clinical performance by Rosenallis who got the 3 points they need to remain in the hunt for the title.