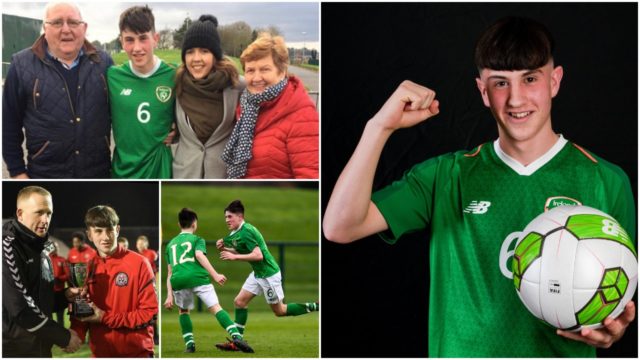 This young man is one of the brightest young talents in Irish soccer at the moment.

Portlaoise native Colin Conroy has been nominated for the U-15 Republic of Ireland International Player of the Year award.

Conroy has been nominated alongside two of his international colleagues – details of which have not yet been confirmed.

If Conroy wins, he will follow in the footsteps of Troy Parrott (2017) who plays for Spurs and Lee O’Connor (2015) who now plays for Manchester United.

The nomination is justified recognition for the Bohemians/St Kevin’s Boys midfielder who has risen through the ranks at an incredible rate.

He represented the Midlands at the Kennedy Cup as an U-13 when playing for Portlaoise AFC – despite the prestigious competition being for U-14s.

He transferred to St Kevin’s Boys in Dublin a year later where he has played for the last three seasons following their amalgamation with Bohemians to enter the League of Ireland structure.

Conroy, who is from Sheffield Cross outside Portlaoise and the son of Martin Conroy and Caroline Allen, was called up to the Ireland U-15 squad in 2017 and subsequently captained them in a friendly with Poland.

The Portlaoise native subsequently played twice against Cyrprus for the U-15s before graduating to the U-16 squad at the end of last year.

So tonight, Conroy will take his place among the best men and women to represent the Republic of Ireland at a ceremony which will be broadcast live on RTE 2.

Speaking ahead of the awards, which Colin will attend with his mam and dad, Colin told LaoisToday what being nominated means to him.

He said: “I am absolutely delighted to be nominated for this award – it is a real honour.

“I have worked extremely hard over the last number of years to get to where I am and I want to continue to improve.”

The 29th ‘3’ FAI International Awards takes place in RTE and will be shown live on RTE 2 from 8.30pm.