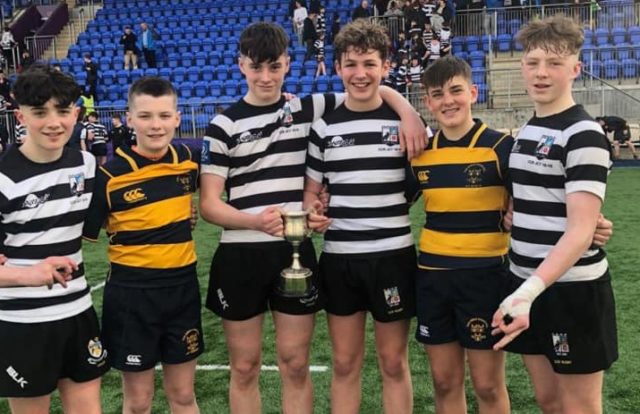 The rugby season is beginning to wind down across the country at schools and club level but there was a game played this week that had a big Laois interest.

Cistercian College Roscrea took on Kings Hospital from Dublin in the Junior Cup Plate final in Donnybrook – with Laois players playing with both teams.

But it was the Roscrea lads that came out on the winning side, winning a high-scoring affair 31-24.

Camross duo John Nolan and Paddy Sheeran were joined by James Conroy and Richard Whelan, both from Portlaoise, while Thomas Bradley and Jack Pretorious were part of the Kings Hos team.

Both Nolan and Sheeran play hurling with Camross while Conroy and Whelan were part of the Portlaoise U-14 football team that got to the All Ireland Feile final last year.

All six have won numerous underage titles with Portlaoise, many under the guidance of Philip Bradley, Thomas’s father, as well Declan Kelly, two men who do huge work with the youths in Portlaoise Rugby Club.