It was another typically busy day on the local soccer scene with games taking place in the Midlands and Carlow involving Laois teams.

Here is a rundown on some of the days along with all of today’s results:

Both teams lined out in Mountmellick this morning to contest this Semi final in perfect conditions.

Abbeyleix were sporting their new kit kindly sponsored by Bank Of Ireland and were certainly looking the part.

The game was touch and go throughout the early exchanges, a keenly contested affair with both teams strong in the challenge there was little to separate them.

Daniel Coffey returning to the side after injury was doing well in the back line, he was in good company with ever present Dean Byrne and David Brennan solid in defence.

Going forward Abbeyleix were having some joy out on the wing with Leon Bradish putting in a fine performance moving the ball forward to the awaiting Jamie Coffey and Joe Bergin, on the other side Killian Burke was moving really well until he had to be be replaced after 25 mins following a nasty twist of his ankle. The sides went in level at the break.

The second half started in much the same vein, although Abbeyleix had to be alert at the back they looked to have things under control but St Cormacs were threatening from set pieces and broke free a couple of times with good through balls, Andrew Bonham quick off his line on one occasion with a brilliant sliding tackle to clear the lines.

Adrian Stynes who was introduced for the injured Burke put in a super shift using his strength to upset the St Cormacs back line, for a big lad he showed some neat touches on the floor aswell and a number of times put Abbeyleix through on goal but for efforts to be well saved by the St Cormacs keeper who has to be praised for the excellent game he had.

As the game wore on it continued to be evenly contested, Abbeyleix had to be strong in the tackle with Terry Lawless showing his grit and determination ably assisted by Oisin Carroll it looked like this game was destined for extra time and so it was.

The first ten minutess came and went, although Joe Bergin had the ball in the net it was ruled out for offside, into the second half of extra time and St Cormacs appeared to tire, Abbeyleix were rentless going forward and the break through finally came when the excellent Joe Bergin finished low to the net to finally put Abbeyleix ahead.

Within two minutes Abbeyleix had a second – a Stynes pass set Joe Bergin free down the left wing, his low ball across the square found Leon Bradish who finished from close range to seal the victory.

Abbeyleix needed their full compliment of players and all who were introduced put in some great effort to see the game through, special mention to Conor Bergin for his contribution to the cause, Darren Whelan and Conor Reilly were strong in the tackle when introduced also.

First up however is a Leinster Junior Shield Semi Final which takes places in Abbeyleix next Sunday against Dublin side Mid Sutton Sportslink.

Clonaslee United dented neighbours Rosenallis’ title hopes this afternoon as they came away with a 3-0 win.

Title chasing Rosenallis started the game the stronger and the better of the first half chances – hitting the crossbar directly from a corner.

Clonaslee took the lead five minutes into the second half when teenager Bob Downey found the net after a great pass from PJ Fitzpatrick.

Sean Dunne doubled Clonaslee’s advantage before Downey grabbed his second of the game to wrap up the win.

Rosenallis must now do it the hard way if they are to win the league.

They need to win all three remaining games, including beating Walsh Island to force a playoff with Walsh Island.

Towerhill came out the right side of a seven goal thriller against Offaly side Gallen this afternoon.

Towerhill started off slowly and Gallen took lead. But Towerhill got back into game then when Martin Hillard was taken down in box Nathan Carpenter scored the resulting penalty low into the bottom left corner.

Shortly after Emeka took a shot from edge of box, the Gallen keeper spilled it and Hillard followed up to tap in.

This left it 2-1 at the break and Towerhill built on their lead as Emeka gathered ball on edge of box turned his man and finished well to keepers left.

Leon McDonald then crossed a ball to the far post for Martin Hillard to head in his second of the game.

Gallen pulled one back shortly after to make it 4-2 but Emeka got his second when he gathered ball on edge of box and finished well with his left. 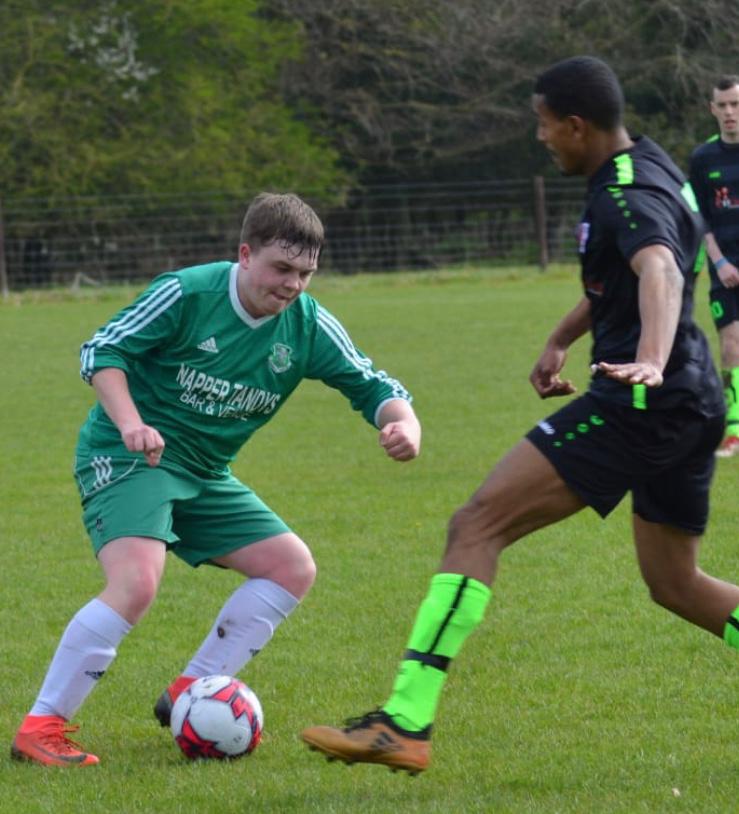 Stradbally Town hosted league champions Gentex this morning in the last league game in Division 2 for both of these sides.

On a perfect morning for football Stradbally got off to the perfect start and were 1-0 up inside 15 minutes.

Playing with a high tempo Stradbally forced a turnover in the Gentex midfield and Jake Byrne’s effort was well saved but Podge Fitzpatrick quickly followed up and buried the rebound.

In a great contest the league champions drew level from the penalty spot on 25 minutes. The game continued to play out at a frantic pace for the remainder of the first half.

The second half resumed as did the end to end action with both sides creating chances. With 25 minutes to go Stradbally regained the lead, Jake Byrne hammering home a left footed half volley from close range.

Gentex held onto their unbeaten league record in added time when a corner went directly into the Stradbally net after some confusion at the back.

There was still time for both sides to hit the post late on and Stradbally had one final chance saved by the Gentex keeper.

Stradbally have at the very least two games left – the Division 2 Cup Semi Final vs winners of Moate/O’Moore and Counties Cup Last 16 game vs Abbeyleix ath.

SEE ALSO – Wearing sandals on nights out, shop mishaps and praise for Portlaoise Hospital– it’s all in our Tweets of the week