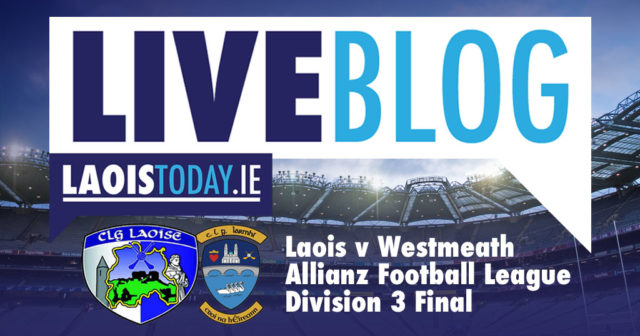 The Laois senior football team go for their second league title in 12 months this evening in Croke Park.

This will be Laois fifth time in the last year to play in Croke Park and they will be hoping to bring back memories of their first trip when they triumphed over Carlow to win Division 4.

Westmeath stand in Laois’s way this time and the game throws in here at 4.45pm.

Ahead of the game, Laois have made three changes to the side that defeated Carlow two weeks ago.

Portarlington’s Robbie Pigott is out with a hamstring injury and his place on the team goes to the returning Colm Begley.

John O’Loughlin comes in for Kevin Meaney in midfield having recovered from injury while there is a first ever start for Courtwood’s Sean O’Flynn.

The Mountrath CS student, who will sit his Leaving Cert in the summer, is in for his first ever start in place of The Heath’s Denis Booth.

The action gets underway at 4.45pm and you can follow all of the action as it happens below: