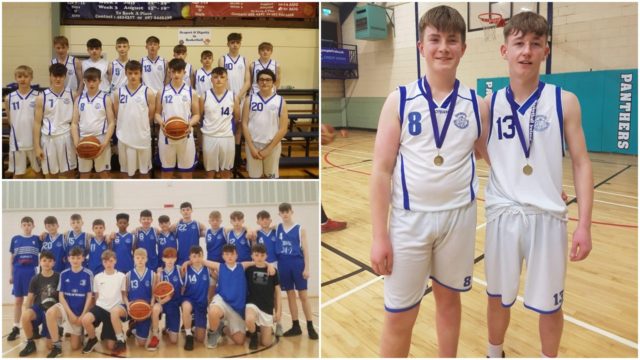 2019 has been a remarkable year for Knockbeg College on the sporting fields and that success continued yesterday on the basketball court.

Knockbeg’s 2nd Years qualified for the quarter finals last week after defeating Presentation College Carlow and Old Bawn CS Tallaght in the Playoffs which were held in their brand new sports hall.

The lads faced Cork side Skibbereen CS in the quarter finals yesterday and triumphed by 27 to 20.

In the Oblate Hall in Inchicore, St Brendan’s Belmullet stood in Knockbeg’s way in the semi final but they once again came out the right side of a 28-22 scoreline.

The side, who are coached by Colin Maxwell and Laura Dowling, will now face Colaiste Lorcain Castledermot on Wednesday May 1 in the National Basketball Arena, Tallaght at 1.30pm.

Knockbeg faced Castledermot in the Midlands League final earlier this year and won by 23-21 – so another tight game is anticipated.

Meanwhile, Knockbeg’s First Years will be hoping to follow in the footsteps of their older counterparts on Friday.

They took on St Kieran’s College of Kilkenny and Coláiste Colm, Swords of Dublin in the Playoffs on Monday and won both games to reach the All-Ireland ‘C’ quarter finals.

They are off to the National Basketball Arena in Tallaght on Friday at 11am to face St Michael’s College, Ballsbridge of Dublin in the quarter final.

If they win that, they will face a semi final on the same day against the winners of St Olivers PP, Oldcastle and Dunmore CS.