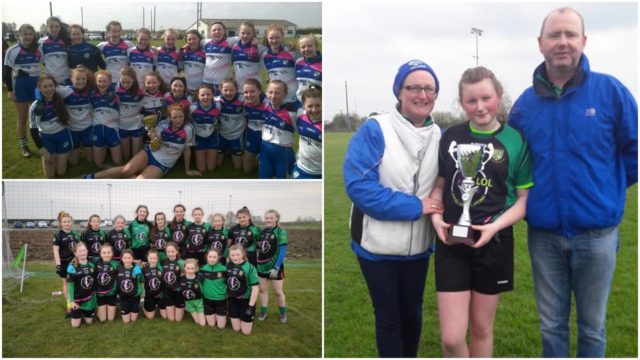 St Conleth’s and Ballyfin came out winners of their respective A and B competitions which finished facing gale force winds in both The Heath and Clonad.

Portlaoise fought until the very end but sheer resilence and only allowing The Town kick two points in the opening half meant St Conleth’s saw this final out as Feile winners for the second year in a row.

On their path to the final St Conleth’s came up against a determined St Brigid’s side but showed great character to win out by two points. Portlaoise topped thier group and faced Sarsfields in the semi-final, winning 2-4 to 1-3.

Stephen Hoary’s St Conleth’s side then faced Portlaoise in the final, playing against a gale force wind in the first half.

A magnificent display of determination saw them only conceed tw points in the opening half.

Aoibhe Byron, daughter of Laois All-Star keeper Fergal Byron, showed she could also rule over the goals, raising the green flag in what proved as a crucial as St Conleth’s went to win on a scoreline of 1-4 to 0-3.

The ‘B’ final was another exciting affair between Ballyfin and Mountrath in Clonad yesterday.

Both teams having played very tough semi finals, with Ballyfin defeating Killeshin in the semi-final to emerge to the grand finale.

Both teams left it all on the field but it Ballyfin who finished victors on a scoreline of 5-4 to 3-1.