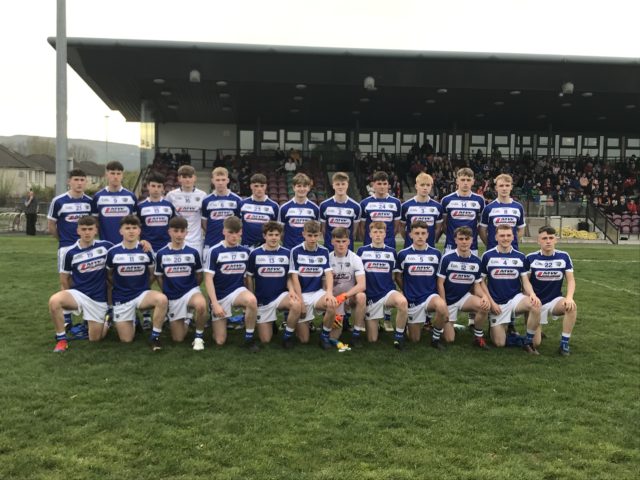 A last gasp Brian Whelan free salvaged a draw for Laois in their Leinster minor opener.

The Ballyroan-Abbey man showed nerves of steel as he converted a free from 40 metres in the sixth minute of second half time in IT Carlow tonight.

Laois looked dead and buried with the game deep in added time but when Eddie Critchley was fouled, Whelan had the chance to claim a point and he did.

The sides finished level at the end of the first half too but Carlow must’ve went into the dressing room wondering how after a host of missed goal chances.

They butchered a three on one when Dylan Doyle over cooked a pass to Anthony Keating.

Dan Brennan’s floated sideline kick caused pandemonium in the Laois defence and the ball eventually struck the post before eventually going out for a 45.

They also kicked six wides and that allowed Laois to stay in the game.

Dylan Doyle opened the scoring for Carlow but Laois responded when Ciaran Burke fisted over from Rioghan Murphy’s ball.

Dunne then gave Laois the lead for the first time after 24 minutes from a free but Carlow hit back again via Keating and Darragh Nolan.

But a Conor Goode score from distance just before half time sent us in level 0-5 apiece.

Carlow started the second half like a train with Darragh Nolan and Dylan Doyle putting them two ahead in the first two minutes.

Laois introduced Ciarán O’Neill as a half time sub and he cut the arrears with his first touch.

But Carlow were well on top now though as points from Doyle and Nolan moved them 0-9 to 0-6 ahead after 40 minutes.

Laois cut the gap to two as we entered the final quarter through Mark Keogh and then a Brian Whelan free after 53 minutes left one in it.

But a Dylan Doyle free put Carlow two ahead with two minutes to play.

However, Laois came back as points from Brian Whelan and Rioghan Murphy leveled the game as we headed for injury time.

In the first minute of it, Dylan Doyle was fouled and landed his sixth point of the evening.

Carlow had the chance to increase that lead to two but Paddy Regan’s effort off the outside of his boot just dropped wide.

But Whelan saved Laois with the last kick of the game.

Laois now face games against Westmeath and Longford In their remaining group games.