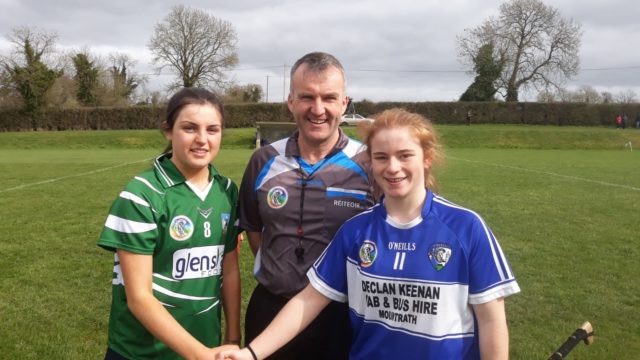 This weekend sees the Laois minor camogie team travel to Nenagh to take on Limerick in the All-Ireland ‘B’ final at 1pm today, Saturday April 27.

Before the game, we profiled each of the Laois players involved and spoke to sharpshooting full-forward Kirsten Keenan.

Here is our preview to today’s All-Ireland final:

So far Robert Jones’s side have played four games – winning each of them.

They played three games in group one, winning all three to top the group and earn themselves in a spot in the semi-final against the second place group two side, Derry.

The Laois minor camogie panel got their All-Ireland campaign off to an exquisite start over Roscommon at the beginning of the league.

Their next encounter was a thriller of the highest order, as they clawed out a victory over now-final competitiors and favourites Limerick.

In the semi-final, they defeated Derry by 12 points to emerge as All-Ireland finalists.

Limerick were hotly tipped as favourites to emerge top of group one, but a loss in Laois’s clean sweep meant they finished second on the table.

The defeated Westmeath 2-19 to 11 points and will certainly be no easy task for the Laois women today.

Laois’s last meeting with Limerick in the group stage was a thriller of the highest order.

Laois’s tenacity and defending in packs saw Limerick only record two points in the first half – both from frees.

Laois led 0-10 to 0-2 at the interval but Limerick clawed this right back in the second half.

Limerick had all the momentum in the second half as it looked as though Laois could be in danger of losing their cool as Noelle Curtin and Shauna Foley added a point and a free a piece.

An Aoife Morrissey goal meant there was just three in it while Laois were unlucky not to put away three goal chances.

With five minutes to go, Laois led by two. Hearts were in mouths for those aching few minutes.

A fired up Laois, led by captain Walsh, got to work. Quinlan added a second crucial point and Laois walked away victors after an intense second half.

The referee for the final is Justin Heffernan (Wexford).