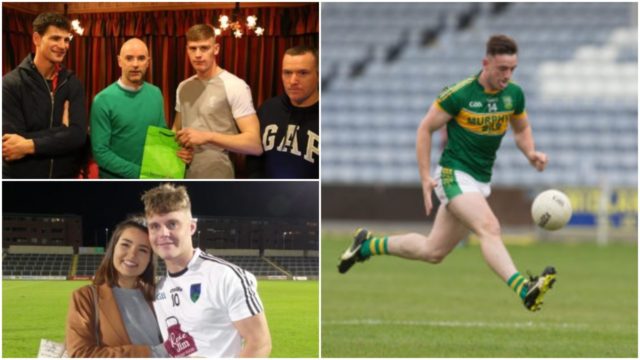 It was a big night in the ACFL Division 1B with three games down for decision.

Stradbally, Ballylinan and Courtwood were the winners and we have a rundown of each of the games below:

A dominant second half display from Stradbally saw them score a 14 point win over Mountmellick in Bill Delaney Park this evening.

Derek Conroy’s charges struggled to get going early on but a goal just before half time proved crucial as Stradbally got on top from their and never looked back to claim their third win of the campaign.

The signs were bright for Mountmellick early on as they led by 0-6 to 0-3 after 20 minutes despite playing against a stiff breeze.

Jack Deegan was Stradbally’s main man on the night and it was his goal which proved the catalyst for the change in the game.

The move was actually started by Stradbally corner back Tadhg Murray who made a great interception inside his own square and that started a counter attack involving Colm Begley, Eoin Buggie and Tom Shiel before Deegan rattled the back of the net.

Eoin Buggie, Tom Shiel and Deegan all raised white flags in the first half too to make it 1-6 to 0-6 in Stradbally’s favour at half time.

Mountmellick failed to score in the third quarter of the game as Stradbally extended their lead to nine points with scores from Deegan, Buggie, Shiel and Colm Kelly.

A misplaced Stradbally pass in attack gave Mountmellick their first score of the second half after 46 minutes as they broke up field where Eoin George smashed the ball to the net after gathering a great pass from Eoghan Keogh.

George and Bernard Rochford would add further points for Mountmellick but that would be as good as it would get for them.

Stradbally made the game safe with late goals from Colm Kelly and John Clancy to seal a fine win.

Three goals for Courtwood did the trick as they claimed their third win of the season and moved up to second place in the table.

Goals from Niall Donoher and Luke Doran helped them into a 2-3 to 0-5 lead at half time.

Killeshin kept battling away in the second half but Doran’s second goal settled the tie as Courtwood won by seven in the end.

Courtwood will have the chance to cement their spot in the promotion places when they host third-placed Arles-Killeen next week.

Meanwhile, Killeshin will be looking to climb out of the relegation zone when they face Mountmellick next weekend.

Ballylinan emerged from this top of the table clash with their 100% record still intact thanks to a four point win over Arles-Killeen tonight.

In a pulsating affair, Ballylinan shaded the first half as they ended it in front 2-6 to 1-8.

Gary Walsh smashed home two goals for the visitors but Killeen were never far away.

Paul Kingston, Jason Enright and Donie Kingston all raised green flags but it wasn’t enough for Killeen as Ballylinan ran out four point winners in the end – their fifth straight win.

They face bottom club St Joseph’s on Tuesday night in a bid to continue their winning ways while Arles-Killeen will look to get back into the promotion places when they face Courtwood next weekend.