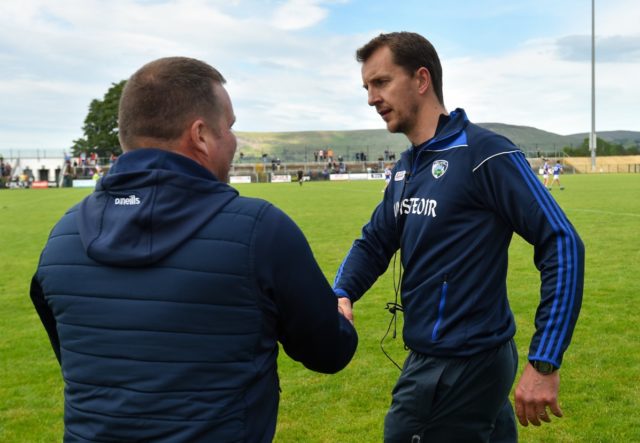 The Laois footballers made the long trip home from Derry on Saturday night content with a hard-earned win and the comfort of being able to look forward to another championship clash next weekend.

And manager John Sugrue was delighted with his side’s application as they were rewarded for the possession when sub Eoin Lowry struck for the crucial goal late on that helped Laois to a 1-13 to 0-12 win.

“We showed a little bit of ourselves in the second half,” said the Laois boss afterwards.

Similar to the performance against Meath in the Leinster semi-final, Laois had plenty of the ball in the opening 35 minutes – but struggled to make an impact.

“We got sucked in about around the ball in the first half and we didn’t gamble on enough with the wind. When we needed to go at them we inclined to turn back.

“In saying that the boys adjusted well in the second half and we really played with great commitment and great guise.”

Without experienced campaigners Colm Begley and Mark Timmons once again, Laois needed everyone to step up and Sugrue gave first championship appearances to Sean Byrne and Mark Barry as well as to Eoin Buggie who hadn’t featured for the county in almost two years.

Full-back Denis Booth was one player to come in for praise for his first-half showing but after picking up a yellow card before the break, he wasn’t risked in the second half.

“It was a calculation,” said Sugrue in relation to the decision to take off The Heath man at half time.

“Denis Booth set the temperature for us. Without a shadow of a doubt he was the one lad that set the temperature in the first half with his physicality. And he just got the yellow card and unfortunately we were playing against the wind and we couldn’t take the gamble of going down to 14.”

In relation to the new faces, Sugrue said that they’ve all been going well in training and he had no fear of throwing them in.

“They’re fellas who are showing in training. Sean Byrne came in there and looked at home. But he has looked at home the last couple of weeks in training and he’s a fella who has bided his time, he has waited long enough and now he’s able to play.

“Eoin (Buggie) has been unlucky with injuries here and there but he is coming into his own and you can see form in training. Sean O’Flynn stepped in at the finish. Sean has had his exams and we probably, to some degree, the last day against Meath looked for too much out of him, starting him. Sean will come again with great energy after having a rest after doing his exams.”

Laois once again spurned a number of good goal scoring chances, particularly at the start of the second half  but Sugrue was happy that Laois didn’t drop the head with goal-scorer Eoin Lowry coming in for praise.

“We had chances to put a bit of daylight between the teams but fellas stayed at it, they didn’t get downhearted. Their focus was quite good in the second half but we certainly do need to be more clinical under the crossbar as well as over it.

“It was a great finish from Lowry – again, there’s fellas that are very disappointed not to be on the team. He is definitely one of those fellas. Eoin has put his hand up in training.

“Unlucky not to start but then he comes in and you know and trust that he has the ability to make a difference when the game is in the embers.”

And the Laois manager also had a word of praise for Graiguecullen’s Danny ‘Dicey’ Reilly, one of Laois’s top performers on the day.

“Dicey our Ethiopian. Dicey has worked really hard and it is great to see the chap moving like he has been because he was laid up for long tracts of last year and he had to bide his time.

“He’s a young man with a great lot of energy and great to see him burn off some of it there today.”

Sugrue added that it was unlikely that Mark Timmons will be back available for next weekend as he continues to recover from a broken hand but he is hopeful that Colm Begley may be a bit closer to returning.

Laois will find out their Round 3 opponents when the draw is made on RTE Radio 1 at 8.35am on Monday morning.

SEE ALSO – EXPLAINED: Who the Laois footballers can face in Round 3 of the All Ireland Qualifiers – and where