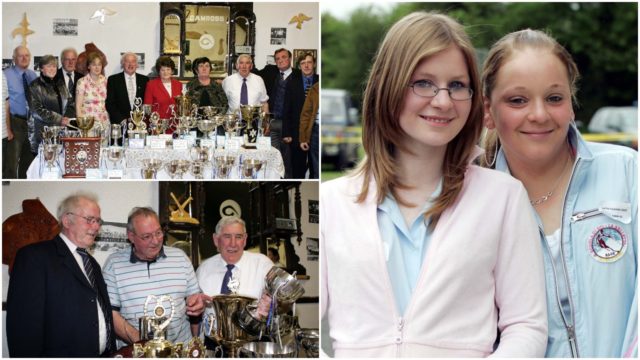 For this week’s Moment in Time we are taking a look back at 2005 to the Fleadh launch.

Camross were all set for Laois Fleadh in June 2005. On a glorious June evening, set against the backdrop of the Slieve Blooms, Camross C.C.E officially launched the Laois Fleadh Cheoil.

The event took place on Sunday, June 5 in Camross.

“Will we get it across in Camross” went the call from Stephen Conroy president of the Laois Comhltas at the launch of the Laois Headh Cheoil.

The branch who have sought no financial support or sponsorship are, in Mr Conroy’s own words, “well able to look after our own Fleadh.”

Preparations in the community were at an advanced stage, not surprising for a place that “only lives for two things, hurling and music.”

Paddy Duffy, the National Treasurer, emphasized the importance of the Fleadh for the young people in the community, adding that he had a tremendous regard for the Comhaltas people of Laois.

He went on to say that “we got the first part of the job right by selecting Camross.”

The local Parish Priest who has opened the doors of his house for the musicians admitted that “he knew it was going to be a sucess”.

Fleadh secretary Chris Phelan said she couldn’t have done it on her own and she had strong praise for the committee. She went on to bring up the all important question of the weather.

She said she hoped the weather “would favour them”.

When it comes to weather on that weekend and Laois Fleadh there’s only one man to ask, and that’s exactly what chairman of the Comhaltas, Brendan Reiliy did putting the question on everybody’s lips to the weather man himself, vice-chairman Peter Hogan.

The answer was short and very sweet to the musicians and all involved, “fine day.”

Brendan Reiliy acknowledged the great work of the committee and the extent to which it benefits the young members of the community.

He spoke of the tragic bus accident during that week and said “no one knows when we get caught” adding that this was why occasions like the Fleadh are so important.

Declan Good, PRO and MC for the night expressed his thanks to everyone who brought back trophies explaining that there where “a lot of young people waiting for them again” and that they are the “living heart of Ceoilteoiri Comhaltas.

To finish the day up Brendan Reilly said that most of the trophies are in memory of past members allowing them the chance to “appreciate the young” while at the same time they “honor those gone.”

SEE ALSO-Moment in Time: Knocking on the door of Knock NS in 2009