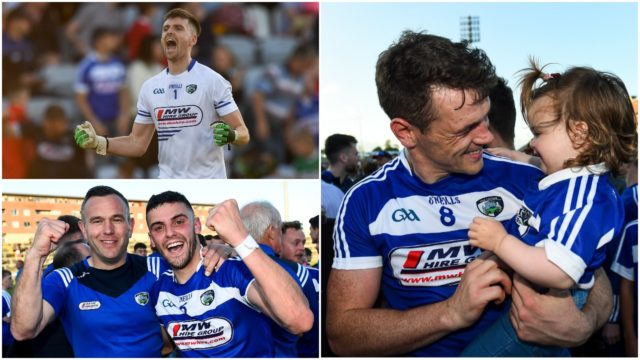 Today saw the Laois senior footballers power past Offaly into Round 4 of the All-Ireland qualifiers, with an a sublime performance by Paul and Donie Kingston guiding them through.

John Sugrue’s men kept Offaly in the game at the end by kicking a host of wides but they had enough work done to run out five point winners.

It is called MAN of the match for a reason but really you could give this to both Donie and Paul Kingston.

But we’re giving the nod to Paul simply because he has had a difficult year up until now. He failed to nail down a place in the league but moved to centre forward today, Paul ran the show and kicked two great scores at the start of either half to give Laois some much needed forward momentum.

He worked tirelessly too and made a number of interceptions – including one deep in injury time inside his own 21 with Offaly probing for a goal.

A crowd of 6,735 turned up to that game and while that is low in comparison to the numbers that used to turn up to matches involving these two rivals in the past, it was still far higher than in recent years.

In fact it caused such a problem that the game had to be delayed by ten minutes as Laois GAA officials tried to get everyone through the turnstiles in time for the start.

The stand was more or less full and there was a sizeable crowd in the terrace too which made for a brilliant atmosphere.

Laois manager John Sugrue raised a few eyebrows before throw in when he decided to drop leading scorer Evan O’Carroll and replace him with veteran Ross Munnelly.

The 36-year-old had only played a handful of minutes in the defeat to Meath and had not figured at all in the wins over Westmeath and Derry.

But in the Arles-Kilcruise man was thrown from the start and he raced around the field like a man in his mid 20s – scoring two great points including a difficult free into the wind.

We’ve said it plenty of times, but we will only truly appreciate the level of commitment and service that Ross Munnelly has given to our county when he retires – although the rapturous applause he received when he left the field tells you that most people do get it.

Laois looked vulnerable in their full back line in the first half against Offaly this evening.

Gareth Dillon was given a really tough time by Bernard Allen and needed keeper Graham Brody to come to his rescue while Denis Booth and Stephen Attride were similarly struggling with the space Niall McNamee and Ruairi McNamee were getting.

However, it was all change in the second half. Booth, with perhaps his substitution at half time against Derry after picking up a yellow still in his mind in the first half of this game, became far more aggressive and stripped Offaly forwards of possession.

Gareth Dillon got on top in his battle with Bernard Allen – robbing him of possession on a couple of occasions and also making some great blocks while Stephen Attride did likewise.

Better forwards than what Offaly have may well score goals against Laois though if they are afforded the space that the Faithful were given in the first half though.

For 60 minutes, Laois played as good football as they have played all of this year.

They had eight different scorers and wracked up 19 points with just a handful of wides – centre back Robbie Pigott’s bomb from over 45 metres the highlight of them all.

However, Laois became sloppy in the final period and that allowed Offaly to stay in the game as Laois kicked six wides on the spin – some of them from relatively easy positions.

However, Evan O’Carroll landed a late score though to settle the nerves as Laois march on.

Kieran Lillis and John O’Loughlin ruled the skies in O’Moore Park this evening as they won almost all of their own kickouts and a fair chunk of Offaly’s too.

So much so that both of Offaly’s starting midfielders, Eoin Carroll and Peter Cunningham, were substituted. With the scoring exploits of everyone around them grabbing the headlines, the platform that these two gave the team cannot be overlooked.

12 months on from where Laois’s season ended against Monaghan, they are back at the same stage of the championship once again – the last 12.

Laois will now be drawn against one of the provincial losers – either Cavan, Galway or Cork – in Round 4 of the Qualifiers with the winner advancing to the Super 8s. Laois cannot be drawn against Meath as the sides already met this year.

The draw for Round 4 will take place on Monday morning at 8.35am on RTE Radio One.

Fellow Leinster sides Kildare and Westmeath saw their summers ended this evening at the hands of Tyrone and Clare respectively while Mayo are also in the pot for the draw on Monday.

SEE ALSO – Laois footballers launch on in the Qualifiers, a Masters win, and two Feile semi-finals await – it’s all of today’s GAA results