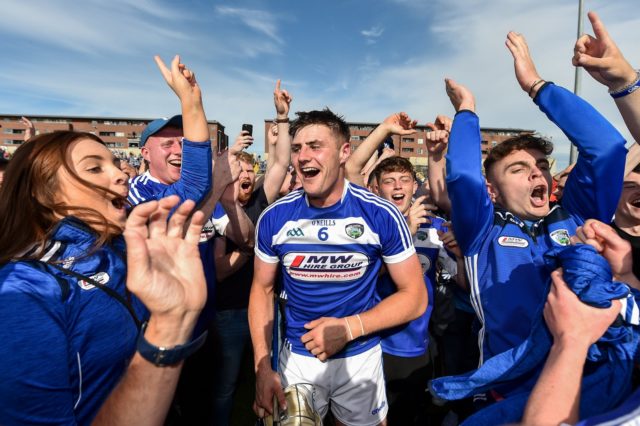 Over three hours after the final whistle sounded – it still feels strange to type it.

Not since the Laois footballers claimed Leinster glory in 2003 have people from the O’Moore County experienced joy and raw emotion like this.

The day itself began rather strangely as the GAA decided to stage the All-Ireland Round 4 Qualifier between Meath and Clare in O’Moore Park beforehand.

Meath advanced by the minimum to claim their place in the Super 8s and moments after the full time whistle, the majority of the supporters began to make their way out of O’Moore Park with their seats in the stand and spots in the terrace quickly taken up by Laois and Dublin fans.

Yours Truly was off duty today and on the rare occasion that this happens, I like to watch a game on a nice sunny day from the terrace.

So I entered O’Moore Park at the back of the stand and walked all the way around the ground before picking a spot in the terrace at the back on the goals on the Town end.

When I climbed up the steps to the back of the terrace, I encountered former Laois and Stradbally great Damien ‘Goggy’ Delaney who was at the game with his six-year-old son DJ.

Damien, a Leinster senior football winner in 2003, and myself found ourselves quickly surrounded by a sea of Dublin fans as the atmosphere began to build ahead of throw in.

The chat around the ground at that time ranged from Laois ‘keeping it respectable’ to maybe ‘keeping it tight early on and seeing where they would end up’.

Nobody thought Laois were going to win – but Eddie Brennan’s men are made of stern stuff.

They made a great start with Aaron Dunphy’s goal helping them build up a lead that they held onto throughout the half – 1-12 to 0-10 at half time.

Laois exited the ground just in front of me and captain Paddy Purcell gathered all his troops together before they headed for the dressing rooms – the noise when they left the field was deafening but that was only a taster of what was to come.

The Dubs looked a different animal on the resumption of play and scored four points in a row to get the deficit back to one.

Would Laois begin to wobble? Would the exploits of last Sunday in Croke Park begin to tell? Would the celebrations following that win start to take effect?

Eddie Brennan’s men dug deep again and drove over more scores to go back into the lead. Dublin though kicked again and they tied up the game for the first time with 55 minutes on the clock.

All of those early first half doubts returned to the mind again. And at that exact moment the temperature seemed to rise – the sun was beating down and the fans were beginning to sweat as much as the players were on the field.

The Dubs smelt blood but Laois turned to their bench where Conor Phelan, Eric Killeen and Stephen Bergin were sprung from to add a new dimension to proceedings and Laois roared again with the next three points.

‘Laois, Laois, Laois’ rang out around the ground and all of a sudden all the momentum was with the home side once more.

Laois PRO Pat O’Sullivan’s announcement that three minutes of injury time would be played was greeted with desperate moans all around but Laois stood firm until Dublin were awarded a 21 metre free in the final minute of it.

You could barely watch at this point as Sean Moran lined up his effort but the roar that greeted Enda Rowland’s save let you know that everything was ok.

An even greater roar met the final whistle. It was an explosion of emotion that surged and reverberated around O’Moore Park – the likes of which Yours Truly has never experienced before.

A pitch invasion soon followed and some very clever person in the Laois PR team decided to turn on ‘Lovely Laois’ over the tannoy. Dubs fans and players stood motionless on the field, in the stand and on the terrace as their season came to a shuddering and unexpected end.

Out on the field, a swell of people gathered around the Laois players around the middle of the field as fans rushed to congratulate their heroes for providing them with something really special.

If you could capture the feeling at the moment and bottle it – you would be a billionaire.

It was a shame that the game wasn’t shown live on but it some ways it made it a bit more special as it was a moment just for the 12,000 or so fans to enjoy.

It is for days like today that men like Cheddar Plunkett, Pat Critchley and so many others soldiered in the name of Laois hurling.

I hope all of them saviour this tonight. Bring on Tipp.