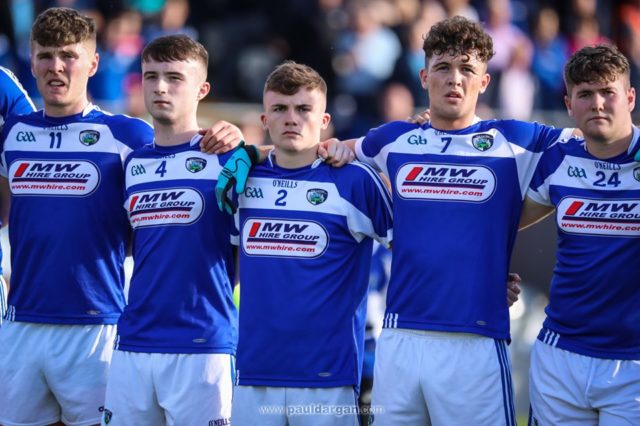 Laois U-20 boss Bill O’Loughlin has named his starting 15 for the Leinster semi final clash with Meath in O’Moore Park on Tuesday.

Laois have won two games in this championship already and one more will see them reach their first final at the grade in a decade against either Dublin or Wexford.

Laois dumped out All-Ireland cham.pions Kildare in Round 1 and were then given an almighty scare in Round 2 by Westmeath.

Ahead of this game, Laois have made two  changes to their team from the win over Westmeath.

Sean O’Flynn from Courtwood and Mark Barry from O’Dempsey’s, who have both played with the Laois seniors this year and are now available for selection following the end of their championship campaign, both come straight back into the team.

O’Flynn starts at centre-back in place of Jack Lacey from St Joseph’s while Mark Barry comes in at centre forward instead of Courtwood’s Niall Dunne.

The format has changed this year with Leinster reverting to straight knock-out and the introduction of various league competitions – one of which Laois won.

Billy O’Loughlin’s charges were placed in the Andrew Corden Cup alongside Wexford, Tipperary, Carlow and Waterford where they won all their matches and claimed silverware at the grade for the first time since 2007.

Like last year in the case of Finbarr Crowley, the rule prohibiting those who play senior from playing U-20 has struck Laois again as Courtwood’s Sean O’Flynn and O’Dempsey’s Mark Barry had been unavailable for the campaign so far.

However, following Laois’s elimination against Cork on Saturday, the lads are both now free to play.

Meanwhile, Meath have named an unchanged team from the one that defeated Offaly to face Laois.