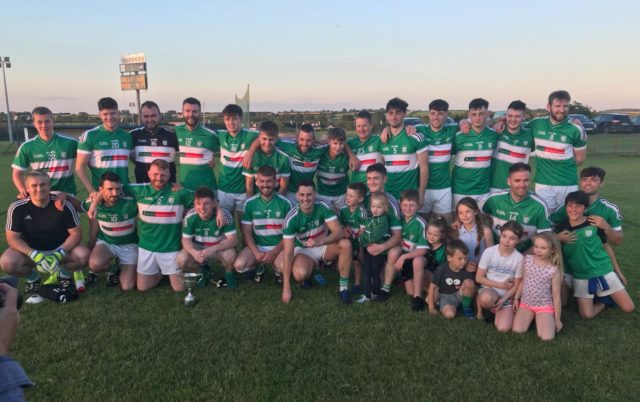 It took 80 minutes in total and they scored five goals and 30 points between them – but in the end Ballyfin finally claimed the Laois ACFL Division 3 title thanks to a thrilling win over The Rock this evening in Mountmellick.

When Brendan McCann whistled for the end of the game, Ballyfin were three-point winners.

The Rock, though, had played their part in an epic. They came from seven points down at half time to force a draw at the end of normal time and were six points at half time of extra time, only to score two goals after the turnaround to briefly take the lead.

Ballyfin held their nerve, however, and shot the last four points of the game to eventually pull through.

The quality of the contest and the drama defied the game’s status as a league final for the fourth tier competition in the county.

There was a range of fine displays on each sides – from players at both ends of their careers.

Sean Moore hit 1-6 for Ballyfin and showed numerous touches of class. The Connollys were all very impressive, Allan scoring three points from play from wing-back and Darragh scoring three points from a defensive role also after coming on as a half-time sub. Dan Molloy scored four points from play, Ricky Quillinan got three, Louis Duff two and the long-serving Jason Horan got through a mountain of work and was still going strong in the dying stages of extra time.

For The Rock, Stephen McDonald scored 1-4 after coming on as a sub, last year’s Laois minor Sean O’Neill got 3-1, Tom McDonald was a leader from start to finish while his brother James gave a real old-school full-back performance and knocked Ballyfin lads down like skittles on more than one occasion.

Aaron Dowling put The Rock into the lead with a point in the opening minute – but it was the only time The Rock would lead until extra time.

Sean Moore was on fire in the opening stages and hit three of Ballyfin’s first four points, the other coming from centre-forward Jack Priestley to open up a 0-4 to 0-1 lead after 15 minutes.

Jonathan Allen pulled back two frees for The Rock but Ballyfin responded with the next four – from Max Connolly, Allan Connolly, Dan Molloy and Priestley again.

Allen clipped over from play heading into injury time but Ballyfin got the last three of the half – two from Allan Connolly and one from Dan Molloy – to lead 0-11 to 0-4 at the break.

The Rock introduced Stephen McDonald, David Murphy and Fionn Kirwan at half time and made a couple of positional changes. It made quite the difference.

They got the first four points of the second half, two from McDonald and one each from Shane O’Connell and Murphy. All of a sudden it was a game again.

Quillinan, Louis Duff and two from Molloy kept Ballyfin ahead though and entering the last ten minutes, they still had five points to spare.

But The Rock kept in touch with points from Murphy and McDonald and were thrown a lifeline when McDonald was fouled for a penalty that O’Neill confidently tucked away.

Sean Moore replied with a free but the sides were level with five minutes left on the clock when O’Neill took a pass from McDonald to fire past Robert Foran from close range.

Louis Duff’s second point looked like it might be the winner for Ballyfin but Stephen McDonald equalised again with his fourth point in an impressive 30-minute showing.

Ballyfin had a last chance to win it in normal time but Sean Moore’s long-range free just went wide.

Two ten-minute spells of extra time would be needed to separate them.

Ballyfin outscored The Rock 1-4 to 0-1 in the first period of extra time, the goal coming late in the half after Moore latched on to a long ball and finished smartly.

James Finn, just back in the country after a two-year spell abroad, had been introduced early in the second half was growing into the game too and he got one of the points.

But The Rock were thrown another lifeline when McDonald was again fouled in the square and O’Neill hit the net again from the penalty spot to complete his hat-trick.

He added a point moments later and then Stephen McDonald got their fourth goal to put them a point up.

But that was to be The Rock’s last score.

Ricky Quillinan soon levelled things up, Finn put them back into the lead and points from Quillinan and Darragh Connolly saw it out.

After the game Kieran Leavy from Laois County Board presented the trophy to winning captain Ciaran Fingleton and praised both teams for their contribution to such a high-quality game.

Both teams now turn their attention to their championship campaigns which get underway in the coming weeks – Ballyfin take on Graiguecullen in the opening round of the senior while The Rock meet St Joseph’s in the intermediate.