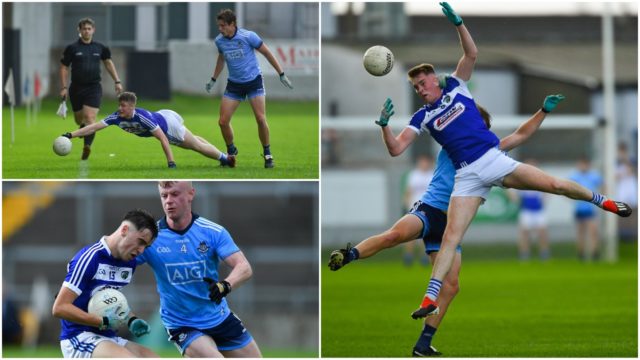 Last night saw the Laois U-20 footballers’ season end as they were defeated by Dublin in O’Connor Park in the Leinster final.

Billy O’Loughlin’s men fell behind early on but although they battled back to lead after 15 minutes, they conceded four goals in the remainder of the game and that was ultimately their undoing.

Captain Diarmuid Whelan had a fine game as he ended it with eight points and the other man in the running for this award was Portlaoise’s Michael Dowling who did very well when switched onto the deadly Ciaran Archer in the second half.

But the accolade goes to Dowling’s colleague in the full back line, Portarlington’s Alex Mohan. As Laois struggled to win primary possession, the full back line was under constant pressure but Mohan always seemed to win the ball when it came into his vicinity.

He dispossessed and turned over countless Dublin attackers and his use of the ball when he got it was very intelligent too.

The Kildare referee drew the ire of the Laois fans on a number of occasions during the evening and while his performance wasn’t the reason that Laois lost, it certainly didn’t help.

It was Cawley’s inconsistencies more than anything else that was most frustrating from a Laois point of view.

In the first half for example, Alan Kinsella was running clear when he was fouled by Eoin O’Dea. The referee signalled advantage but Kinsella was then fouled again inside the penalty area but Cawley brought it back for the free. Then for Dublin’s fourth goal, Laois sub Jason Maher fouled Peadar O Cofaigh Byrne outside the area – the referee once again gave advantage but this time when the Dublin player was also fouled in the box, he spread his arms for a penalty.

Laois had Colin Slevin sent off after 52 minutes for what the referee deemed a strike on James Doran but the whole incident would have been avoided if Cawley had given the Portarlington youngster a free for when he was clearly pushed in the back seconds before that.

And while we are on the subject of discipline, Dublin midfielder Peadar O Cofaigh Byrne committed seven fouls in the game, four of which came after he had picked up a yellow card but yet he remained on the field for the whole game.

So while Cawley’s performance did not decide Laois’s fate, it certainly didn’t help them.

What did ultimately see Laois defeated was Dublin’s incredible shooting accuracy. Tom Gray’s side took 26 shots on goal and converted 22 of them to give them a tally of 4-18.

Laois actually had one more attempt than Dublin and the timing of the victors goals was also crucial.

The first came just before half time when a Laois kick-out went wrong and their second and third goals arrived at moments in the second half where Laois seemed to be gaining a bit of momentum. Wing back Kevin Kennedy’s strike in the 49th minute was the final nail in the coffin.

4 – Gamesmanship from the victors

Dublin were very cute too as whenever Laois seemed to be getting a run on them, they slowed down the game.

This was particularly evident at the start of the second half when Laois fired over two points after carving the Dublin defence apart and if Mark Barry or Alan Kinsella’s efforts had gone that little bit lower, they may have been goals.

Dublin keeper David O’Hanlon went down after the second of those points with some sort of leg injury but the general consensus was that there wasn’t too much wrong with him.

The time it took for him to receive treatment killed Laois’s momentum and Dublin were able to get back on top once they won the resulting kick-out – which the keeper got up to take.

Despite the result, this is still a very young Laois side that came up against a team that had all bar one of their starting team up to the age.

Ciaran Archer is the only Dublin player who can play U-20 again next year while Laois will have Matthew Byron, Michael Dowling, Alex Mohan, Dean Brophy, Sean O’Flynn, Colin Slevin, Ronan Coffey and Mark Barry available next year. Subs Niall Dunne and Jack Owens can also play so there is certainly the makings of a strong team there.

While Friday night may not have gone as planned, this Laois team still defeated Kildare, Meath and Westmeath on the way to the Leinster final and that is not something we have been able to do regularly over the last decade.

The likes of Seamus Lacey, Rob Tyrrell, Eoin Dunne, Michael Doran, Alan Kinsella, Dan McCormack and Diarmuid Whelan will now all graduate from this grade and you would hope all of these will be given a chance with the seniors in 2020.

7 – Inter-county season comes to a close

Last night’s defeat meant that the inter-county season for the men’s teams is now at and end for 2019.

On the football end, the seniors achieved promotion to Division 2 of the league and reached the last 12 of the All-Ireland championship for the second year running.

The U-20s won the Andrew Corden Cup and reached their first Leinster final since 2009 while the minors reached the Leinster semi final for the second year running and lost out once again to the eventual champions – Kildare this time.

In the hurling, the seniors won the Joe McDonagh Cup and knocked out Dublin to reach the All-Ireland quarter final for the first time in 40 years before bowing out to Tipperary.

All-in-all it has been a very positive year for GAA in Laois and we thoroughly enjoyed travelling the country to cover it.

The end of the inter-county season now means that the football championships can begin as scheduled next week.

The senior championship gets underway next Wednesday with Ballylinan taking on Portlaoise while the junior, intermediate and rest of the senior games will also kick off after that.