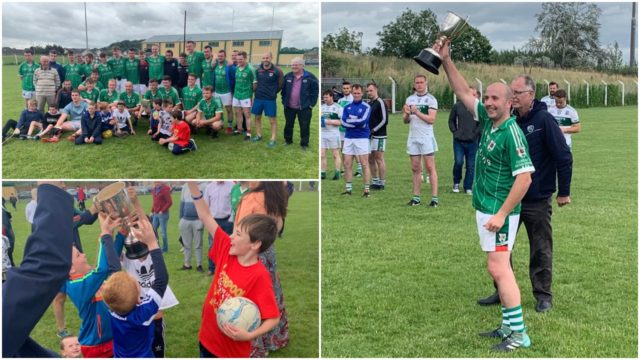 Clonaslee-St Manman’s are ACFL Division 2 champions after former League of Ireland star Niall Corbet inspired them to a six point win over Portlaoise in McCann Park this afternoon.

Corbet landed exactly half of Clonaslee’s total against Portlaoise in a game that is a dress rehearsal for the first round of the Intermediate championship in which the sides will meet again in next weekend.

Glen McEvoy got the games first score before Corbet scored his first of many points after great running by Sean Dunne had earned his side a free.

Bob Downey got his side’s third score as Portlaoise were only starting to find their feet.

Jack Brown had a goal chance but his shot lacked any conviction. Cian Barrett replied with a fine score with Conroy pointing a free in response to his score.

Portlaoise then got their goal courtesy of Brown after good play by Ross Brennan to set up Brown to fire into the net. Brown raised a white flag as it looked as Portlaoise were in control.

Seamus Rosney and Corbet responded for the village before Brown scored another point.

Once again, it was Rosney and Corbet who scored the points in response to the Brown’s score and these two scores leveled the game.

Corbet was immaculate from placed balls and scored a superb free from the 45 yard line. Brown fired over another point before Paddy Downey scored a great point.

Corbet was having a superb game and raised the white flag after a fine outside of the boot effort to leave Clonaslee 0-11 to 1-6 ahead.

Clonaslee began the second half with a two- point lead and Corbet didn’t rest on his laurels as he kicked point after point in the second-half.

One of his scores was another stunning effort before he kicked over another three frees as his side took full control of the game.

Portlaoise never got into the game in the second-half and lacked any attacking threat.

However, their only score of the half came right at the end as substitute Liam McGovern patted the ball into the net after good play by Kevin Fitzpatrick and James Nerney.

Clonaslee were deserved winners and they’ll take this victory into the championship where Portlaoise are their first-round opponents.

For Portlaoise, they’ll hope they can work on what went wrong and overturn the result when the teams play in the coming weeks.