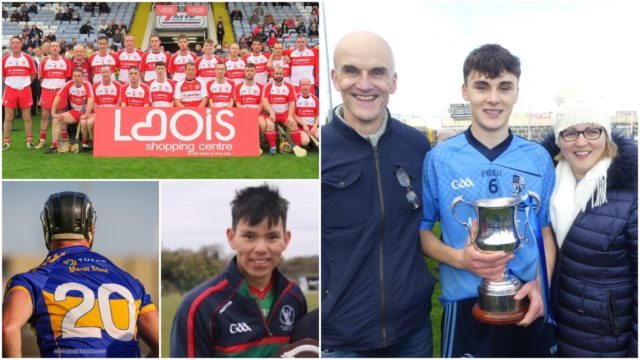 The championship has resumed and you know what that means – it is our first installment of the Team of The Week for 2019.

We had action in the third and fourth grades of the club hurling championship last week and we did our very best to bring you reports on all of the games.

Clough-Ballacolla and Camross lead the way on the first team of the week of the new season with three players making the selection following their fine wins.

A total of 9 different clubs are represented below:

After a fine performance in the league final against Castletown a few weeks ago where he pulled off a number of fine saves in Park-Ratheniska-Timahoe’s Division 3 triumph, Ramsbottom was impressive again here.

His side recorded a six point win over Rathdowney-Errill and Ramsbottom once again kept a clean sheet.

Trumera pulled off a remarkable comeback to defeat Clonad in Shanahoe last night and central to that win was the goal scored by Paddy Coogan.

With Clonad dropping Fionn Holland back as a sweeper in the second half, Trumera decided to push the defender up on him and it worked a treat as Coogan collected a pass from Cathal Brophy and slammed Trumera’s second goal to the net.

Every good team needs a solid full back and the Camross intermediates certainly have that in the shape of Daniel Breen.

He marshalled his defence excellently for the course of the game and held Ballypickas to just 1-1 from play in the encounter.

Corner backs who score are a feature of this Team of The Week and we have another one here in the form of Ciaran Finlay.

He fired over a point as Borris-Kilcotton scored a three point win over Rathdowney-Errill on Saturday.

As good as Daniel Breen was in the full back line, Damien Keenan was simply excellent in front of him.

Keenan is also joint-manager of this team with Tommy Delaney and Fran Hogan and they will have big ambitions on moving through this championship.

‘Harry’ as he is known – Brendan McEvoy is a brilliant hurler who can’t be too far off making the Clough-Ballacolla senior team.

He is a superb fielder of the ball and his use of possession is always intelligent.

Started at wing forward for Clonad in their defeat to Trumera but played as a sweeper in the second half so we have selected him at wing back as a compromise.

On a miserable night for hurling, the O’Dempsey’s footballer was flawless on frees as he fired over seven of them along with two more points from play to finish with nine in total.

Fionn Holland was on the Laois minor hurling team last year and so too was Thep Fitzpatrick who hit 11 points for Rathdowney-Errill in their defeat to Clough-Ballacolla.

The teenager is another player on this list who may not finish the season at this grade as he is certainly someone with the potential to play at senior level.

Damien Bergin has been knocking around the Clough-Ballacolla intermediate team for the last number of years and he was on fire in their big win over Mountmellick.

He fired over 11 points and also set up one of his sides goals in a dominant display.

1-4 from play is a serious return in any game and that is exactly what Craig Carroll achieved in his sides win over Ballypickas.

He may well be on the fringes of the Camross senior team but displays like these could well see him push in there as the season progresses.

His goal at the start of the second half began the dramatic comeback and he also fired over four points – including an outrageous sideline cut.

Emo footballer James Hillard was Mountmellick’s leading light in the first half where they competed reasonably well with Clough-Ballacolla.

He fired over three points and his aerial ability will be crucial for the 2018 Junior champions if they are to remain in this grade this year.

Another teenager who makes our first selection of the year is Abbeyleix’s Ciaran Byrne.

He won minor footballer of the year last year but is just as capable with the hurl having played for both the Laois minor hurlers and footballers in 2018. He has made the step up to adult level and was in fine form in Abbeyleix’s win over Kyle.

Emmet Jones has been a stalwart on Borris-Kilcotton’s second team for a number of years and his scoring power was evident again on Saturday night.

He finished the game against Rathdowney-Errill with 1-8 and his goal proved crucial as Borris-Kilcotton won by three.

Only one player scored a hat-trick this week and that man was Clough-Ballacolla teenager Chris Rafter.

He took all three of his goals very well, two of which came in the second half and he also fired over two points.

Our subs of the week are back and first is Ray Kelly who shot four points for the Rathdowney-Errill juniors after coming off the bench in defeat to Park-Ratheniska-Timahoe.

A real stalwart of the club, Ray will surely be pushing for a starting berth in Round 2.

Another man who came off the bench and fired two points. Ray Cummins is fine man to have to come on when things get tight at the end of a game.