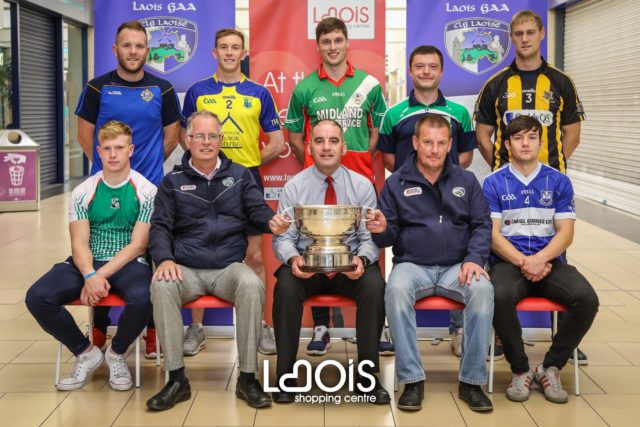 The Bob O’Keefe Cup gets underway on Thursday as Portlaoise go into battle with Castletown in Group B.

Camross are looking to win the Bob O’Keefe Cup for the third-year running. Camross defeated Rathdowney-Errill in last year’s final after a titanic battle.

Camross won the Palmer Cup and also went on to win Division 1 for the third year running. Camross will be looking to secure a treble-treble, which would be an astounding achievement in any sport.

In terms of relegation, it’ll be a toss-up between Portlaoise, Abbeyleix and Castletown. Portlaoise will hope to remain at the senior grade having won the Senior ‘A’ Championship last year.

Rathdowney-Errill will be looking to avenge the defeat from last year’s county final. Mark Kavanagh, Paddy Purcell and Jack Kelly all starred in Laois’ run to the All-Ireland quarter-final and their victory in the Joe McDonagh Cup.

We profile the eight competing teams below:

Team News: Liam Delaney won’t feature as he is out of the country. Other than that, Abbeyleix will have a full hand to pick from.

League Form: Having lost their first five games, Abbeyleix defeated Clough-Ballacolla and The Harps. Abbeyleix were scheduled to play in a relegation final, but due to the Divison 1A final being between Rathdowney-Errill and Clough-Ballcolla’s second teams.

Fixtures: Group A; Round 1 vs Clough-Ballacolla August 3

Prospects: Having lost five out of seven games in Division 1, a relegation final could potentially loom for Abbeyleix. Drawn in a tough group with Camross, Borris-Kilcotton and Clough-Ballacolla, Delaney’s men will be hoping to catch Clough-Ballacolla off-guard in the opening round.

Team News: Sean Downey is out of the country. Seamus Fitzpatrick is injured with a cruicate injury while Lir McDonald is out with a broken leg.

League Form: Ballinakill finished fourth in Division 1A and will feel disappointed not to have gained promotion into Division 1. They finished behind Rathdowney-Errill and Clough-Ballcolla’s second teams.

Prospects: Off the back of their semi-final appearance last year, Ballinakill will be hoping to secure a second or third place finish this year. Star player Charles Dwyer will be hoping to continue his fine form that he showed with the Laois hurlers.

Team News: Borris-Kilcotton have a full hand to choose from for the upcoming championship.

League Form: Having only missed out on top spot by a point, Borris-Kilcotton were beaten in the semi-final by Camross.

Fixtures: Group A; Round 1 vs Camross August 3

Prospects: Tipped by the bookies to claim the Bob O’Keefe Cup, Borris-Kilcotton will face a tough challenge from the likes of Camross and Rathdowney-Errill. They’ll be hoping to go one step further than last year when Camross beat them at the semi-final stage.

Team News: Zane Keenan is a doubt for the Championship after suffering an ankle injury. Mark Dowling is stateside and is set to miss the first few games.

League Form: Camross won their third Division 1 title in a row. They finished third overall and showed that they have what it takes to win the big games having defeated Borris-Kilcotton(semi-final) and Clough-Ballacolla (final).

Prospects: Camross will be looking to win the Bob O’Keefe Cup for the third year in succession and secure the treble-treble. Their returning inter-county stars along with highly-talented panel will make them a force to be reckoned with for this year’s championship.

Team News: Martin Phelan will miss the opening round of fixtures as he is out of the country.

League Form: Castletown finished fourth in Division 1 with their highlight being a victory over Rathdowney-Errill (2-18 to 0-14).

Fixtures: Group B; Round 1 vs Portlaoise August 1

Prospects: Having being drawn in the group of death last year, Castletown ended up in a relegation final against Ballyfin. Two Ben Conroy goals saved them, but have since lost their gaels and the services of Conroy.

Team News: Willie Hyland and John A Delaney will both miss the game vs Abbeyleix with suspension.

League Form: Clough-Ballacolla topped the Division 1 table with six out of seven wins. They ended up losing the league final to county champions, Camross.

Fixtures: Group A; Round 1 vs Abbeyleix August 3

Prospects: Having being drawn in a difficult group with Camross and Borris-Kilcotton, Clough-Ballacolla will be hoping to defeat Abbeyleix in the opening round so that they’ll progress from Group A.

Team News: Cahir Healy is out injured for the championship with a knee. Portlaoise will have to use their panel well if they are to avoid relegation.

League Form: Portlaoise topped the Division 1A standings with five wins from seven. Damien Fox’s men will be disappointed to have lost the league final to Clough Ballacolla’s second string.

Fixtures: Group B; Round 1 vs Castletown August 1

Prospects: The loser of the match against Castletown could well be the team relegated this year. Coming in as Senior ‘A’ champions, the quality of opposition might be too much for The Town.

Team News: Rathdowney-Errill at believed to be at full strength.

League Form: Their league campaign didn’t come to much, but due to a host of players involved with the Laois hurling set-up, it wouldn’t have worried them too much to have finished fourth in Division 1.

Fixtures: Group A; Round 1 vs Borris-Kilcotton August 3

Prospects: Having been beaten by Camross in last year’s county final, Rathdowney-Errill will be hopeful of getting their hands on the Bob O’Keefe Cup. They will welcome back Mark Kavanagh, Paddy Purcell, Ross King, Jack Kelly and Eric Killeen after their amazing performances with the Laois hurlers.