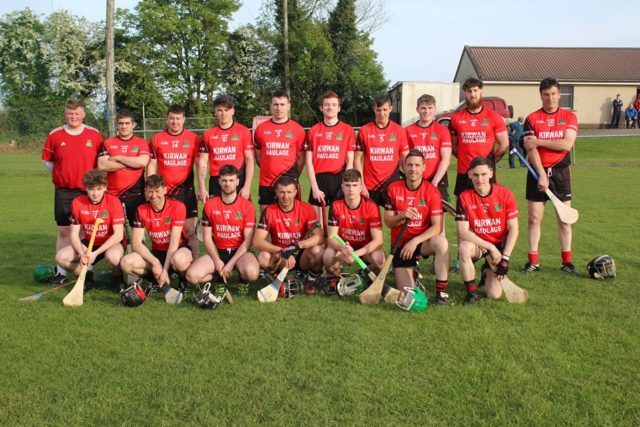 It was a relatively low-scoring match in Borris-in-Ossory tonight, but Shanahoe will have no qualms about that as they secured a win in this opening group A game.

Leigh Bergin opened the scoring with a point in the first minute, which was followed up by a Dylan Cuddy point while Rhian Bergin popped over a free.

Shanahoe were winning the midfield battle, helped by their half back line.

Rhian Bergin scored two frees in quick succession during the 18th minute of play before Josh Hiney then netted to put Shanahoe 1-5 to a point up as the game ticked over to the 20th minute.

Gavin Conroy and Rhian Bergin then swapped frees with Bergin landing a great shot from the placed ball inside his own half.

Darragh Delaney replied for Slieve Bloom, his run through leaving him with the best score of the game.

Mark Kirwan popped up with a point for the Shanahoe while Damien Campion scored a superb long range free on the stroke of half time to make the score 1-8 to six points.

The second half began with three points for Shanahoe from Josh Hiney, Rhian Bergin and wing back Dayle Bergin.G

avin Conroy was keeping Slieve Bloom in it with a couple of frees, but the winners kept the scoreboard ticking with three further points from play.

In the 48th minute Darragh Hiney rushed out to block a goal chance, had it been scored, Slieve Bloom would have only been down by five points instead of eight.

This seemed to take the wind out of Slieve Bloom as Shanahoe went on to score five more points, in comparison to Slieve Bloom’s three.

The fact that Shanahoe had 10 different scorers to Slieve Bloom’s three tells a story in itself.

Shanahoe will be happy with this performance, they were served well by Jack Delaney at full back.

The half back line led by Leigh Bergin were dominant throughout. Rhian Bergin gave a flawless exhibition of free taking. Five of the six forwards scored from play for Shanahoe with Josh Hiney scoring 1-1 .

For Slieve Bloom, they will be bitterly dissapointed with their own performance.

Damien Delaney in goal was in fine form and was best served by Tom Delaney and Gearoid Lowry in the full back line.

Elsewhere Darragh Delaney and Ciaran Conroy fought hard. However five points from play was not enough in this game, with Gavin Conroy weighing with 10 points, eight from frees.