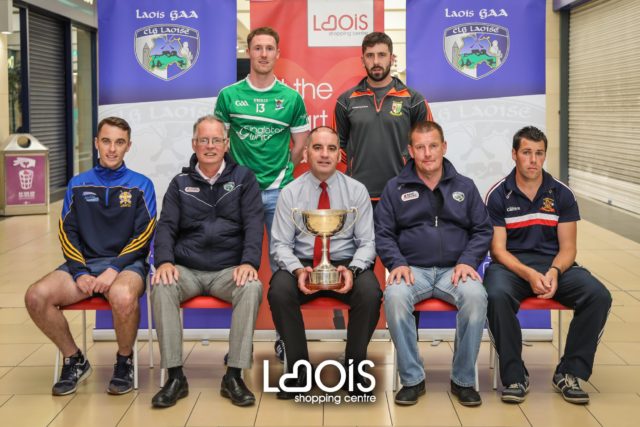 This year’s Senior ‘A’ hurling championship gets underway this week with eight teams vying for glory.

Ballyfin, having been relegated last year from senior, will be looking for an immediate return to the top-tier.

The Harps, who were the beaten finalists last-year, will be looking to rectify that loss and go one better and win the Senior ‘A’ championship.

Clonaslee St Manman’s are also a force to be reckoned with their mix of youth and experience in their ranks.

Slieve Bloom come into the championship as Intermediate champions and will be looking to remain in the Senior ‘A’ grade.

Group A is made up of Clonaslee St Manman’s, Ballyfin, Colt and St Fintan’s Mountrath.

Group B consists of Rosenallis, The Harps, Shanahoe and newly-promoted Slieve Bloom.

We profile all eight teams below:

Team News: James Finn and Darragh Connolly have returned after time away. Kevin O’Rourke and Richard Downey are injury doubts.

League Form: Ballyfin finished sixth in the league with their performances being relatively average. Credit to the players, they do well to juggle both hurling and football.

Fixtures: Group A; Round 1 vs Clonaslee St Manman’s August 4

Team News: Clonaslee come into the championship with a full hand to choose from and will be hoping that their panel at full strength will get them back into the Senior grade.

League Form: The league was rather disappointing for them as they finished bottom of Division 1A. They will now play in the third tier next year.

Fixtures: Group A; Round 1 vs Ballyfin August 4

Prospects: They went on to reach the semi-finals last year and will be hoping to go one better and reach the final. They will be favourites to win the championship alongside The Harps.

Team News: Anthony Dunne is out with a hand injury.

League Form: They performed gallantly in Division 1A, winning two out seven matches and just staying up at Clonaslee’s expense.

Fixtures: Group A; Round 1 vs Mountrath

Prospects: Having lost their Clonad contingent due to their Gaels being removed, Colt might struggle to avoid a relegation final this year. They’ll be hoping a win against Mountrath will get them a third-place finish in the group.

League Form: They finished comfortably in mid-table in Division 1A this year and were never in danger of being relegated following four wins.

Fixtures: Group A; Round 1 vs Colt August 3

Prospects: Having escaped relegation last year by defeating Trumera, Mountrath will be hoping they can finish third in Group A. Their match against Colt will be a huge game for both teams as the loser of it could find themselves in a relegation final.

Team News: Cillian Callaly is a welcome return as Rosenallis look to mount a challenge for this year’s championship.

League Form: Rosenallis were let off the hook as there was no relegation from Division 1 due to two second teams competing in the Division 1A final. They did however have two good wins against Castletown and Abbeyleix.

Fixtures: Group B; Round 1 vs The Harps August 2

Prospects: Having reached the semi-finals last year, Rosenallis will be looking to push on this year and reach the final. The difficult thing for most of the players is juggling between hurling and football.

League Form: Operating in Division 2, they performed solidly and secured second-place. A loss in the semi-final to Borris-Kilcotton dented any chance of winning silverware.

Fixtures: Group B; Round 1 vs Slieve Bloom August 2

Prospects: Having lost their Gaels, Shanahoe will be looking to build on last year’s loss at the quarter-final stage to eventual winners Portlaoise. It wouldn’t be a surprise to see them in the semi-finals.

Team News: Joint captain Shane Farrell is an injury doubt for the opening round against Shanahoe. Ben Conroy is sidelined for the championship and without him Slieve Bloom may struggle. Robbie Burke is away and might feature in the latter stages of the championship.

League Form: Last year’s Intermediate champions competed in Division 2 and finished fourth, just missing out on a semi-final place. Four wins out of seven will give them momentum coming into the championship.

Fixtures: Group B; Round 1 vs Shanahoe August 2

Prospects: After a wonderful performance in last year’s Intermediate championship, Slieve Bloom will be hoping they can stay up for at least a year. Without the services of Ben Conroy, Slieve Bloom will do well not to be in the relegation final.

Team News: Ronan Delahunty is injured, but other than him The Harps are fighting fit and ready to mount a chase for the Senior ‘A’ crown.

League Form: Both them and Rosenallis competed in Division 1 and they avoided the drop due to two second teams competing in the Division 1A final.

Fixtures: Group B; Round 1 vs Rosenallis August 2

Prospects: The Harps come into the championship as favorites, just as they were last year only for them to be beaten by Portlaoise in the final. Padraig Delaney, Michael Lanigan and the Comerford twins gives them a solid foundation to push on and go one better than last year.