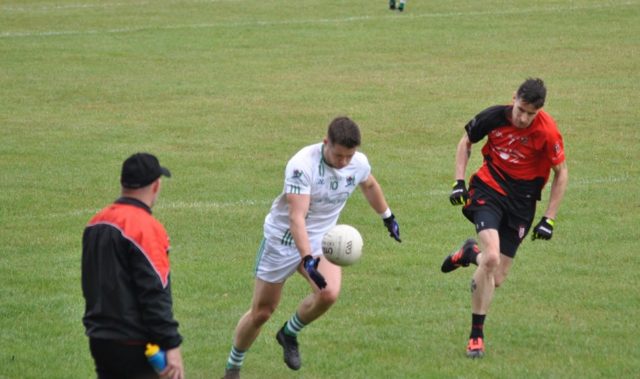 It was a night of pouring rain and slippery football, but Paddy Dunne’s Rosenallis side will not mind drying off to this after their 17 point win over The Rock in Mountmellick tonight.

This win means a semi-final for Paddy Dunne’s side, their second in two years, while The Rock are gone into a quarter-final.

With the wind on the backs in the first half, Brian Fitzpatrick put Rosenallis on the board as the clock ticked over towards one minute.

Laois U20 Eoin Dunne stepped up next as he swept through the crowds to make it 0-2 to Paddy Dunne’s side.

Shane O’Connell then made space to lodge over The Rock’s first point after six minutes.

Rosenallis took over for the next 10 minutes of play – adding 1-2 without reply in this time.

Donnagh Callaly cut out a pass on The Rock’s full-back line and found Fitzpatrick – who buried the ball into the net to make it 1-2 to Rosenallis.

A free from Eoin Dunne and a run through from Thomas Keating resulted in a point for the corner-back, sending Rosenallis six points into the lead.

The Rock pushed back through Seán O’Neill and Kieran Carroll sailing the ball over the posts.

An Eoin Dunne catch from The Rock kickout was the catalyst in Rosenallis’s next score.

He set up Mark Dunne to get on the board while Ronan Murray benefitted from running play from John Lennon to set him up to score Rosenallis’s seventh point of the evening.

A foul on Lennon meant a free from the 45 metre line – one which Eoin Dunne converted with ease to go seven points ahead.

A Dowling free pushed this back to six.

The Rock won the following kickout, with Stephen McDonald raising the white flag to leave just five between the sides at the break. Rosenallis 1-8 The Rock 0-6.

A stellar ball across the length of the field by O’Neill found McDonald, who rounded off the play by raising the white flag.

The Rock were dealt a fatal blow as freetaker and centre-forward Aaron Dowling was shown the line after 35 minutes.

Eoin Dunne then sailed over the score of the match from an acute angle on the wing to put five back between the teams.

A close range Dunne free brought this up to six, while Rosenallis were badly caught for The Rock’s next point – Conor Flynn laying it off to McDonald who placed it over.

But more bad news came The Rock’s way. A second yellow was handed out to Kieran Conroy after a high tackle on Lennon – sending the centre back to the line.

Rosenallis dominated with the extra man.

They launched eight points ahead through Murray (two – one free) and an Eoin Dunne placed ball to bring their tally to 1-13.

In a similar sequence of events leading up to the first goal, a high kick in from Donnagh Callaly landed on top of Brian Fitzpatrick, who punched the ball into the net to make it 2-13.

Subsititute James Jackson then let his presence be known. A point off the right boot would be followed up with a goal – as Cillian Callaly sent in an exquisite pass to the corner forward.

Scores from Eoin Dunne and Jackson rounding off the scoring for Rosenallis.