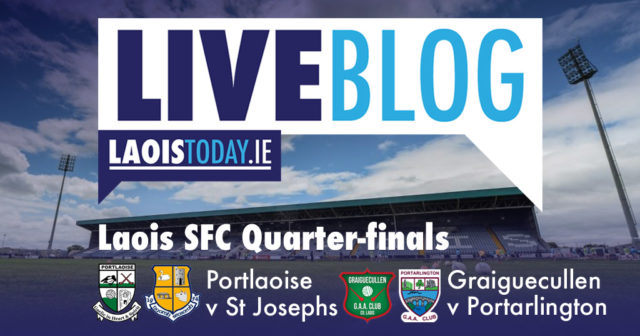 We’re midway through September now and by the end of today, we will be left with just four teams standing (barring a draw).

The Laois Senior Football Championship Quarter Finals are down for decision in O’Moore Park with two games this afternoon and two more this evening.

The action gets underway at 12.30pm in O’Moore Park when three-in-a-row searching Portlaoise take on St Joseph’s.

Niall Rigney’s charges are raging hot favourites and anything less than a double digit win will be a surprise really.

Then at 2pm, we see one of the teams that has the potential on paper to challenge Portlaoise look to book their place in the semi finals for the second time in three years.

Portarlington are ready to go into battle against a Graiguecullen side who themselves are looking to reach their third straight semi final.

Portarlington go into the game as favourites but this one should be a good deal closer.

We’ll be back in the evening then for the remaining two games as O’Dempsey’s face Ballyfin at 6pm and Killeshin take on Ballylinan at 7.30pm with the draw for the semi finals on afterwards.

We’ll also do our best to bring you updates from the Junior semi final between Castletown and Park-Ratheniska which throws in at 12pm in Stradbally.

Laois dog owner fears beloved pet may have been stolen